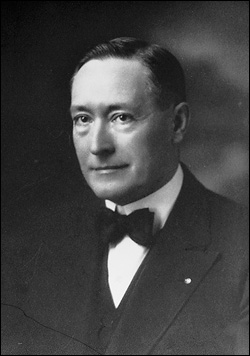 Justice Leon C. Rhodes was born in Guilford, Chenango County.
He was educated in the local schools. After being admitted to the Bar in 1903, he served as a confidential law clerk to Supreme Court Justice Nathan L. Miller, who later became Governor. When Justice Miller was designated to the Appellate Division (First Department), Justice Rhodes continued as clerk and formed a new partnership in Cortland. He returned to Binghamton in 1910 and continued the practice of law. In 1921, he was appointed Corporation Counsel and on December 23 (his birthday) he was appointed to the Supreme Court, Sixth Judicial District, by Gov. Miller to succeed Justice Tuthill. He was elected for a full term in 1922. Gov. Roosevelt designated him to the Appellate Division nine years later. He continued on the Court until May 1939. He had been re-elected to the Supreme Court in 1937. He died at his home in Binghamton at the age of 61 on April 27, 1939.