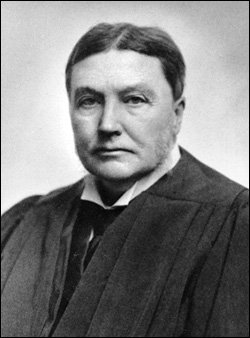 Justice Edgar L. Fursman was born in Charlton, Saratoga County, on August 5, 1838. He was educated at the Schuylerville and Greenwich Academies, the New York Conference Seminary at Charlotteville and at Fort Edward Collegiate Institute. He studied law with Hon. A.D.Wait at Fort Edward (Washington County) and was admitted to the Bar in 1857. After practicing at Schuylerville (Saratoga County) for a time, he moved to Troy in 1866 and formed a partnership with Judge James Forsyth. In 1870, he became a member of the firm of Smith, Fursman & Cowen, which continued in existence for twenty years. He was elected Rensselaer County Court Judge in 1882 and was re-elected in 1888. In 1889, he was elected a Justice of the Supreme Court, Third Judicial District, and during the years 1897 to 1900 he sat on the criminal bench in New York City. Effective January 1902, Gov. Odell designated him to the Appellate Division, Third Department. He resigned in November 1902 and thereafter engaged in the private practice of law. He died April 2, 1910. He served as colonel in the New York State National Guard and for three years was Judge Advocate on General Carr’s staff. He was a descendant of William Fursman, a member of an old family of Oxfordshire, England, who emigrated to America in 1760. William Fursman joined the patriot army during the Revolutionary War and was killed at the battle of White Plains. Justice Fursman was an accomplished trial lawyer.