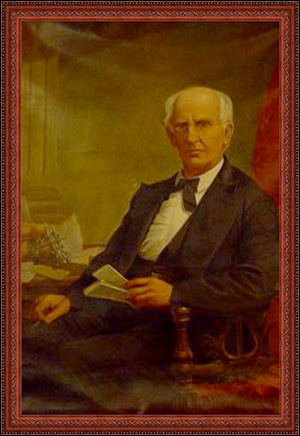 Although George Mason lived most of his life in Madison County, Oneida lays fair claim to him in that he spent the last 10 years of his life there “and perhaps no one who ever commenced practice in Utica in so short a time gained so prominent a position at our bar as he. His advice was highly valued among laymen, and also by the profession; and, as referee, in which position he frequently served, he was almost ideal.”2

Charles Mason was born on July 18, 1810 in Plattsburgh, New York and in 1828 began reading law there. In about 1831, he moved to Watertown, Jefferson County, completing his law studies in the office of William Ruger.3 Mason was admitted to the bar in 1832 and five years later married Ann Cady of Hamilton (Madison County), New York.

In 1838, when Philo Gridley became a State Circuit Judge, Mason moved to Hamilton where he took over Gridley’s practice and would spend most of his life. In 1841, Mason’s wife died; their daughter died in infancy.

On May 13, 1842, the 32-year-old widowed George Mason married the 28-year-old Sophia Helen Osgood (1818-1896), with whom he would have two daughters and share the rest of his life. She was the daughter of Samuel Osgood, one of the 13 men who in 1817 founded the Baptist Education Society of the State of New York, from which Madison University (later renamed Colgate University) developed.

In 1845, Mason was appointed District Attorney of Madison County. The population of the County was about 40,000, and the appointment started him on his career as a public servant. As a Democrat, he was elected to the Supreme Court, Sixth Judicial District, in 1847 for a six-year term, and again in 1853 for an eight-year term.

By this time he had become active in the affairs of Madison University. In 1852 the University awarded him an LLD and from 1855 to 1879 he served on its Board of Trustees. The honorary degree may well have been awarded him in any event, but it seems likely to have been connected with Judge Mason’s role in keeping Madison (Colgate) University in Hamilton, New York. In the late 1840’s there was a movement to relocate the University to Rochester, believing that the University would do better in a large center than in the remote and less accessible town of Hamilton.4 The proposal touched off a heated controversy between the “Removalists” and the “Hamiltonians” who, stunned by the prospect, argued for the benefits of a quiet, rural, educational setting, reminding Removalists of the advantages of rural colleges like Williams and Dartmouth.

As the battle raged and the Hamiltonians were set back by a Trustees’ resolution to relocate, they turned for help to Judge Mason and James W. Nye, a County Surrogate and Judge. Nye brought a proceeding in Supreme Court, where Judge Philo Gridley, in January 1849, granted Nye’s application for a temporary injunction. The opposition was led by Ira Harris, and the injunction vacated by Judge William F. Allen, but on April 23, 1850 Judge Gridley granted a permanent injunction decreeing that Madison University should remain in Hamilton.5 Madison changed its name to Colgate in 1890. Interestingly, Mason, Gridley, Harris, and Allen served on the Court of Appeals at one time or another.6

In 1867 Judge Mason ran as the Republican candidate for the Court of Appeals but was defeated. Governor Reuben E. Fenton appointed him on January 20, 1868, to fill the vacancy created by the death of Chief Judge William B. Wright (1806-1868), as Ward Hunt (1810-1886) became Chief Judge. Judge Mason served for almost two years, until his term expired on December 31, 1869.

In the 1860s, as today, the Court enjoyed a diverse docket, and this is reflected in Judge Mason’s 79 majority opinions. His writings covered a range of topics, from the lofty realm of constitutional law to the workaday concerns of tort. Thus, in Bird v. S.B. Josephine (39 NY 19 [1868]), Mason, writing for the Court, held that an in rem suit brought under an 1862 New York statute dealing with the collection of demands against ships and vessels for supplies provided could not be sustained because the State statute was preempted, and therefore unconstitutional. Mason reasoned that Article III, ‘ 2 of the United States Constitution states that the judicial power of the United States extends to all cases in admiralty and maritime jurisdiction. He also observed that the Judiciary Act of 1789 grants federal district courts “exclusive original cognizance of all civil causes of admiralty and maritime jurisdiction, saving to suitors, in all cases, the right of a common law remedy where the common law is competent to give it” (id. at 21 22). The New York statute, the Court determined, impermissibly trenched on federal admiralty powers.

In Buffalo and New York City Railroad Co. v. Brainard, et al. (9 NY 100 [1853]), the Court upheld a legislative enactment authorizing private railroads to seize land through eminent domain for the construction of rail lines. Writing for the Court, Mason first noted that the Legislature may confer its eminent domain power “upon different officers, confining its exercise however to the appropriation of property required for public use.” (id. at 109). He then rejected the claim that the railroad’s use of eminent domain was not for a “public” use. The act in question, Mason noted, expressly declared the “public necessity and utility of the roads” (id. at 110).

Mason also authored two decisions in tort that, no doubt, promoted the safety of transportation. In Wolfkiel v. Sixth Avenue Railroad Co. (38 NY 49 [1868]), the Court held that a driver of a one horse coach was negligent when he failed to check whether a passenger had gotten into the vehicle before starting it, thereby injuring the passenger’s foot. In Hutston v. Mayor, et al. (9 NY 163 [1853]), the plaintiff was injured when, as a result of the poor repair of a city street, her carriage plummeted into a 35-foot deep chasm left by a railroad company excavation. Judge Mason wrote that the City of New York could be held liable for her injuries because it had a duty “to see that the public streets of this densely crowded city are kept in repair; for where a public body is clothed by statute with power to do an act which concerns the public interests, the execution of the power may be insisted on as a duty, though the statute conferring it be only permissive in terms” (id. at 168).

In 1870, under the amended judiciary article, Judge Mason was defeated as one of the Republican candidates for Judge of the Court of Appeals. Later that year he was named Clerk of the United States Court of Appeals and moved to Utica to take up the duties of that office. There, he lived out the last decade of his life, passing away on May 31, 1879, at the residence of his daughter and son-in-law, Mr. and Mrs. Charles H. Thorn, 119 State Street, in Utica. His remains were taken on a special train to Hamilton, New York, for burial.

In his obituary, the Hamilton Democratic-Republican7 called Judge Mason a man of sterling excellence, rich in saving common sense, modest in his estimate of himself, not demonstrative in any sphere, but fulfilling his obligations in every relation manfully, cheerfully, and with exemplary fidelity.

Judge Mason was twice married. His first wife was Ann Cady of Hamilton, New York, who died in 1841. Their daughter died in infancy. In 1842 he married Sophia H. Osgood (1818-1896), who survived him. Sophia Osgood Mason died in Utica and is buried in the family plot in the Madison Street Cemetery in Hamilton, New York. They had two daughters, Mrs. Charles H. Thorn of Utica and Mrs. Ira E. Chapin of Oneida. Judge Mason was also survived by three sisters and three brothers, one of whom, Joseph Mason, served as a Madison County Judge and as representative in Congress from the Madison and Oswego Districts.

Hon. Chas. Mason’s Argument in the Morse Extension Case [S.I.], 1860. (Mason’s argument before the Commissioner of Patents relative to the Morse telegraph patent.)