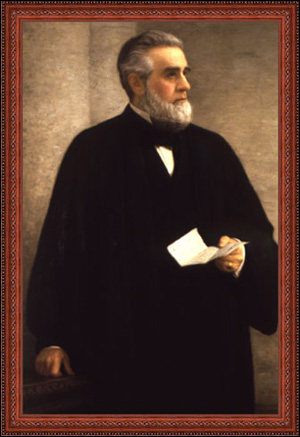 The man who served as the seventeenth Chief Judge of the New York State Court of Appeals1 was born in the small town of Bridgewater, Oneida County, on January 30, 1824, the child of John Ruger and Sophia Brown Ruger. John Ruger, a graduate of Union College, had a flourishing law practice in Schenectady, but subsequently moved the family to Syracuse where he continued to practice until his death in 1855. Young Ruger was educated at Bridgewater Academy and then studied law for several years with his father.

On May 2, 1860, Judge Ruger married Harriet Prosser, the eldest daughter of Erastus S. Prosser of Buffalo. The couple had one son C. (Crawford) Prosser Ruger born on November 8, 1861. He was also called to the bar as his father and grandfather before him.

Judge Ruger continued to practice in Syracuse until his election to the Court of Appeals. He was highly regarded in the legal community and served as counsel in high profile cases, one among them arising from an investigation into contractors’ business dealings with the state involving repairs to and extensions of the state canal system. The Commission appointed by Governor Samual J. Tilden to investigate canal abuses found evidence of fraud and illegal profits, resulting in a suit by the State against James J. Beldon and H.D. Denison who were partners in obtaining state contracts. The State won a recovery of $460,000 with interest. Judge Ruger represented Beldon and was successful in obtaining a reversal and in addition won attorneys’ fees and disbursements which he successfully recovered in a later suit against Beldon (Ruger v. Beldon, 91 NY 646 [Jan. 16, 1883]).3 The resulting animosity between Ruger and Governor Tilden was to cost Ruger dearly in his later attempts to win the Democratic nomination for Chief Judge of the Court of Appeals and other offices.4 Other well-known cases of the time in which he was counsel include the Lindsley murder trial and the suits connected with the Jaycox & Green and People’s Savings Bank bankruptcy.

His Colleagues Admired Him

. . . [a]s one of the ablest members of the Onondaga Bar, being noted as a shrewd, practical and effective lawyer rather than a brilliant orator. In the conduct of his cases, he excelled especially in clearness of statement, methodical arrangement of thought and logical and earnest reasoning.5

In addition to his successful law practice, Judge Ruger contributed to the advancement of his profession. He was a driving force behind the formation of his county’s and state’s bar associations. Judge Ruger served as the first president of the Onondaga Bar Association established June 12, 1875 and continued to serve in that office for the next three years. He was a founding member of the New York State Bar Association, incorporated in November 1876, chosen by his peers to conduct the proceedings. He later served as president of the Association in 1882 and again in 1883.6

In 1864, 1866, and 1880, he was the Democratic nominee for Congress but was defeated each time. At the Saratoga Convention in 1880,8 he was an unsuccessful candidate for the nomination of Chief Judge of the Court of Appeals. In March 1884 while serving as Chief Judge, his name surfaced as a potential Democratic nominee for President of the United States. His reaction was emphatic:

That is a question about which I wish to say nothing further than that I deprecate the use of my name in such a connection. It is pleasant, of course, to hear complimentary things said about one’s self and to feel that one’s friends are anxious to confer the highest honor attainable in the United States, yet I think my duty to those who have placed me in my present position demands my undivided attention. … A Judge of the Court of Appeals owes it to the people to keep as much as possible out of active political work.9

Chief Judge of the Court

Judge Ruger won the election for Chief Judge of the Court in 1882, defeating his Republican opponent, Charles Andrews, then sitting Chief Judge, also of Syracuse, who later succeeded Ruger as Chief Judge.

Seen as an outsider, Judge Ruger came to the Court with an extensive resume but lacked judicial experience. Nevertheless, he authored 274 opinions during his tenure and was praised for his administrative abilities and personal qualities which enabled him to conduct the business of the Court with “rare dignity.” Judge Andrews in his tribute noted “[t]he office of Chief Judge requires for its successful administration more than mere legal learning[.]…[T]act, a knowledge of human nature…and a bearing on the part of the Chief Judge [are necessary so] that parties…feel that they [are] afforded a fair chance….”10 His imposing presence and an instinctive judicial temperament were noted.11 Underneath his stern countenance was a kind nature and a “quaint” humor shown only to those considered intimates.12

In the ninth year of his term on January 14, 1892, Chief Judge Ruger died at his home in Syracuse at 12:30 p.m. after a week-long illness. His last public appearance was in Albany on December 29, where he handed down decisions in election cases. He contracted “catarrh of the stomach” which was aggravated by persistent hiccoughs. His physician advised him to put aside the opinion he was working on, but in his usual fashion the Judge refused to quit.13 His wife and son were with him at the end.

Immediately following his death the courtroom and his chair were draped in mourning and the Court was adjourned until January 20 at 10:00 a.m. Many tributes were paid to him from the bench and bar alike.

Justice George N. Kennedy and Judge Irving G. Vann of the Court of Appeals paid eloquent tribute to the worth and ability of the deceased jurist. Judge Vann said:

His career as a Judge fittingly crowned his career as a lawyer, for the greatest Judge is great only as he is a great lawyer. The record of his work as a Judge is spread through many volumes of the New York reports, and there is not a weak opinion among the hundreds that he wrote. Every question that he considered shows the grasp of a strong mind and a great lawyer. His views upon a question might be wrong, according to the judgment of his associates, but they were never weak or narrow, for his nature was incapable of it. He brought to the office of Chief Judge of the Court of Appeals a mind ripened, matured and fitted by the work of his life for the arduous, exacting and important duties of that high position. He also brought with him industry, integrity, courage, good judgment, good sense, and a lofty enthusiasm for right and justice.14

Four of his colleagues from the Onondaga County Bar Association were appointed as pall bearers to accompany the funeral procession.15 On January 19 the service was held at St. Paul’s Cathedral in Syracuse. The body was taken to Oakwood Cemetery for burial.16

A lawyer, William Cowie, made Judge Ruger the subject of a brief poem called “An Impromptu Offering to Members of the Bar”:

Long may you gather in this room,
Nor be your pledging, toasting,
Restrained by thought of coming
doom-
Inevitable roastin.
But, surely, when you go below,
They will not be uncivil;
If only Ruger with you go,
He’ll charm the very devil.17

Chief Judge Ruger was survived by his wife Harriet Prosser Ruger and a son Crawford Prosser Ruger. No living progeny have been identified as yet.

Proceedings in the Court of Appeals in Reference to the Death of Hon. William C. Ruger, Late Chief Judge of Said Court Who Died January 14, 1892, 129 NY 681.

All of Chief Judge Ruger’s opinions for the Court of Appeals are published in the Official Reports. In addition, any briefs that he wrote and filed at the Court of Appeals are public documents and can be accessed through the State Archives. During his long and varied political and professional life, it is certain he spoke on many occasions and authored articles or other documents relating to his activities.

Arguments of Counsel Before the Court of Appeals, in the case of People v. Denison, Feb 1, 1881, stenographically reported. Courier Print Co. (1881).