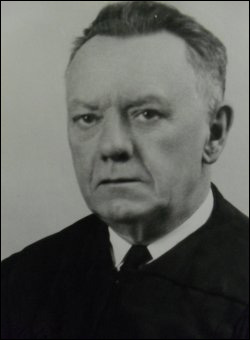 In 1960, Judge Foster was appointed to the Court of Appeals and elected later that year. See his full biography HERE.

Judge Foster also sat on the bench of the 3rd Department; more information can be found HERE.

Sydney Francis Foster was born in Cazenovia, New York on March 23, 1893, the son of a farmer. He attended Cazenovia Seminary and Syracuse University, and in 1915 was awarded his law degree from Syracuse University Law School. He then accepted a position as Deputy County Clerk in Madison County, where he served from 1916 to 1918, having been admitted to the Bar in 1917. When World War I broke out, Foster enlisted in the American Expeditionary Forces, serving in the Judge Advocate General Unit in France.

After completing his military service in 1920, Foster moved to Sullivan County where he joined the law office of Joseph Rosch. Five years later he was elected District Attorney of Sullivan County and served until his election to the Supreme Court, 3rd Judicial District in 1928. While serving on the Supreme Court in Greene County, he presided over the criminal trial of Manning Strewl, who had been charged with kidnapping the nephew of an Albany political leader. In 1937 Judge Foster sentenced Strewl to 15 years after he pleaded guilty to blackmail as a substitute for the 50-year term imposed on him earlier for the abduction.

When he was Presiding Justice of the Appellate Division, Third Department Judge Foster wrote the minority opinion when the court upheld a ban on “La Ronde,” a French film that the Board of Regents had banned as immoral. He held that consorship was “an infringement upon freedom of expression.” However, ten years later, as a member of the Court of Appeals he concurred with the majority when the Court ruled that the book “Tropic of Cancer” was obscene under New York’s obscenity laws.

He retired from the Court of Appeals in 1963 at the mandatory retirement age of 70, returning to the Supreme Court as a certificated trial justice for four more years.

The Judges of the New York Court of Appeals, A Biographical History, Albert M. Rosenblatt [ed.], The Historical Society of the Courts of the State of New York, New York, 2007, pp. 647-651.