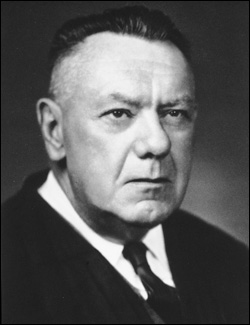 In 1960, Judge Foster was appointed to the Court of Appeals and elected later that year. See his full biography HERE.

Judge Foster also sat on the bench of the 1st Department; more information can be found HERE.

Judge Sydney F. Foster was born March 23, 1893 in Cazenovia, Madison County, the son of a farmer. He attended public schools and Cazenovia Seminary. He graduated from Syracuse University and in 1915 was awarded his law degree from Syracuse University Law School. In January 1916, he was appointed special Deputy County Clerk of Madison County, and the following year he was admitted to the Bar. He served as special Deputy County Clerk until 1918. During World War I, he served (from 1918 to 1919) with the American Expeditionary Force (in the Army Judge Advocate General’s Department), emerging with the rank of sergeant. He moved to Liberty in Sullivan County in 1920 and began practicing law with Joseph Rosch, later a Supreme Court Justice and President of the New York State Bar Association. In 1921, Judge Foster opened a law office with William A. Williams. He was elected Sullivan County District Attorney in 1925 and served until his election to the Third Judicial District Supreme Court in 1928. He was designated an associate justice by Gov. Lehman in the fall of 1939 and served until December 31, 1942. After his re-election to the Supreme Court in 1942, he returned to the trial bench on January 1, 1943. He was designated an associate justice for the second time, by Gov. Dewey, in June 1944. Gov. Dewey also appointed him Presiding Justice of the Third Department, effective January 1, 1949. He served as Presiding Justice until January 1, 1960, when Gov. Rockefeller appointed him to the Court of Appeals to fill a vacancy created by the election of Judge Desmond as Chief Judge of the Court of Appeals; he was elected to the Court later that year. Judge Foster retired from the Court of Appeals at age 70 in 1963. He returned to the Supreme Court as a certificated trial justice for four more years of judicial service. Judge Foster died November 21, 1973, at the age of 80.