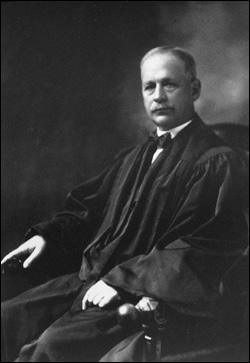 Presiding Justice Charles C. Van Kirk was born on September 21, 1862, in Greenwich, Washington County. He graduated from Colgate University in 1884 (then called Madison University). From 1884 to 1886, he taught in the Boys’ Academy in Troy, and then began the study of law. He was admitted to the Bar in 1888. He then practiced law for eight years in Greenwich as a member of the firm of Gibson & Van Kirk. He then practiced for one year in Port Henry, Essex County, as a partner of Frank Rowe, and, then, until his election to the Supreme Court, as a member of the firm of Patterson, Bulkley & Van Kirk in Albany. He began a long elected career on the Fourth Judicial District Supreme Court January 1, 1906; he retired at the end of 1932. He began his Appellate Division service in January 1921 and served as Presiding Justice from January 1928 until he retired. He died in Greenwich on April 18, 1937.