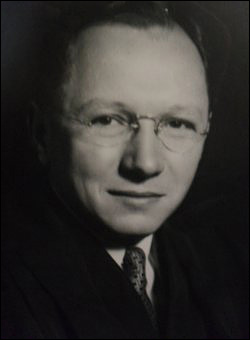 Justice David Warner Peck played a leading role in court reform in the 1940s and 1950s. He oversaw the state’s court system in Manhattan and the Bronx for a decade, and he conducted a 10-year campaign to reduce congestion and delay in the courts. By the time he retired as Presiding Justice of the Appellate Division First Department in 1957, State Supreme Court in Manhattan had reduced calendar congestion to its lowest point in 57 years and delay in jury trials to its shortest in 37 years.

Peck was born and raised in Crawfordsville, Indiana on December 3, 1902. He attended Wabash College there, graduating in 1922. In 1925 he graduated from Harvard Law School and became an Assistant U.S. Attorney for the Southern District of New York. In 1928 he went on to the legal department of International Telephone and Telegraph Company, where he remained for two years. He then joined the law firm of Sullivan & Cromwell, where he became partner in 1934 at age 31.

It was during his time at Sullivan & Cromwell that Peck became active in Republican politics. Among his associates were Thomas E. Dewey, who went on to become Governor of New York, and Herbert Brownell, Jr., a future United States Attorney General. He was Chairman of the Board of Governors of the New York Young Republicans Club in 1934, and one year later was its President.

Peck was appointed Justice of the Supreme Court, First Judicial Department, in 1943 by Governor Dewey. Election to a full term followed later that year. In 1945 he was designated to the Appellate Division First Department. Upon the death of Presiding Justice Francis Martin in 1947, Peck was promoted to Presiding Justice by Governor Dewey. He was 44 years old then and was believed to be the youngest person at that time to have held the position.

He retired from the bench in 1957 and returned to Sullivan & Cromwell as senior partner. In his later years. Justice Peck was the author of The Greer Case, a book based on a court case, and Decision at Law. He was also a great baseball fan. His law clerks called themselves “Peck’s Paragons” and used to hold annual meetings with him at Ebbets Field when the Brooklyn Dodgers played there.

Justice Peck was married to Elizabeth Saville Getty Peck in 1929, with whom he had two sons. After she died, he married Gladys Roach Otto Peck. He passed away in New York on August 23, 1990 at age 87.