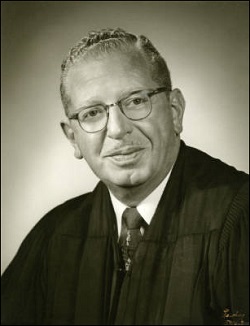 Justice Noonan also sat on the bench of the 4th Deparment; more information can be found HERE.

Robert E. Noonan was born on December 10, 1907 in Batavia, New York. He graduated from Canisius College in Buffalo and received his law degree in 1931 from the University of Buffalo Law School. Bar admission followed the next year.

Noonan served a clerkship at a Buffalo law firm until 1932, when he became associated with William J. Darch of Batavia. He remained there until 1948, at which time he was elected to the Supreme Court 8th District. During his time on the bench, Justice Noonan was a member of the Judicial Conference of the State of New York. In addition, he was designated to serve temporarily at the Appellate Division First Department between the years 1960 and 1964.
Governor Rockefeller appointed him to a full term at the Appellate Division Fourth Department in 1963, where he served until his death in 1965.

Justice Noonan married Helen E. Stull Noonan in 1935 in Batavia. They were the parents of two daughters. Noonan died on May 27, 1965 at age 57 while delivering an address at the annual meeting of the Jamestown Bar Association.