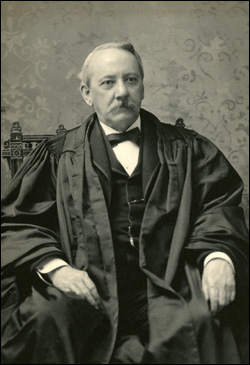 David L. Follett was born on July 17, 1836 in Sherburne, NY. He attended school at Oneida Conference Seminary in Cazanovia, NY and read law in the offices of Rexford and Kingsley in Norwich (1856-58). He was admitted to the bar in January of 1858.

Save for a period spent as U.S. Assessor of Internal Revenue for the 19th District of New York, he practiced law in Norwich for the next sixteen years. In 1874, he was elected without opposition to the Supreme Court for the Sixth District. From 1875 to the close of 1884, he functioned as a trial judge. In 1884, he was appointed to the Appellate General Term for the Fourth Department which had been reconstituted to include the Sixth District and exclude the Seventh & Eighth District. In 1889, he was appointed Chief Judge of the Second Division of the Court of Appeals, a temporary Court created to liquidate the backlog of cases undisposed of by its namesake. Upon the dissolution of this court at the close of 1892, Follett was transferred to the General Term for the First Department, where he remained for three years.

In 1896 a series of constitutional revisions went into effect which replaced the General Term with the Appellate Division and again reconstituted the Departments which assumed their original boundaries. Follett was designated an Associate Justice of the new Appellate Division for the Fourth Department upon its organization, remaining on the court until his death in Norwich on July 5, 1899.