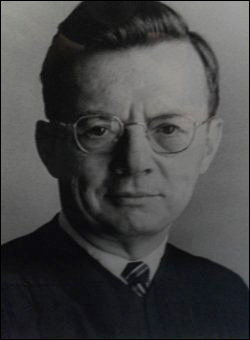 Samuel Joshua Silverman was born in Odessa, Russia, on September 25, 1908. He and his family emigrated to New York in 1913, and he was naturalized in 1925. He attended schools in New York City and graduated Phi Beta Kappa from Columbia College in 1928. Two years later he earned a law degree from Columbia Law School, where he was a Kent scholar and an editor of the Columbia Law Review.

In the 1930s and 1940s, Justice Silverman practiced law at two New York law firms and served as an Assistant Corporation Counsel for the City of New York. He joined the law firm of Paul, Weiss, Rifkind, Wharton & Garrison in 1946, where he represented a number of high-profile clients, including Dr. Robert J. Oppenheimer, the nuclear physicist who was a central figure in the development of the atomic bomb, and who, in 1953, was labeled a security risk by the Atomic Energy Commission. Silverman referred to his work for Oppenheimer as a “blow against McCarthyism,” and it made him proud, ten years later, when a vindicated Dr. Oppenheimer was presented with the Enrico Fermi Award, the highest honor given by the very same agency that had earlier withdrawn his security clearance. Justice Silverman also represented Otto Frank, father of Anne Frank, in a lawsuit over a proposed stage adaptation of The Diary of Anne Frank.

Justice Silverman was elected to the Supreme Court bench in 1962. After 4 years, he was elected to the Surrogate’s Court of New York County, playing a key role in Senator Robert Kennedy’s campaign to clean up patronage and cronyism in that Court. Unfortunately, reform was never brought about, and so Silverman resigned from the Surrogate’s Court and was reelected to the Supreme Court bench in 1970. Five years later, Governor Carey appointed him to the Appellate Division First Department, where he remained until his retirement in 1984.

Upon his retirement, Justice Silverman rejoined Paul, Weiss as senior counsel and also served as a special master for the Appellate Division from 1985 until 1990 and then Chair of the Advisory Committee of Judicial Ethics until 1998.

Justice Silverman was married to Claire Gfroerer Silverman. They had no children. He died on March 6, 2001, at age 92.