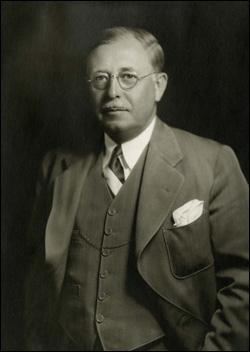 Henry J. Kimball was born in 1889. He was educated at Cornell Law School,
and was admitted to the bar on March 17, 1913. From that time until 1930, excepting the time he spent in uniform during World War I, he practiced law in a prominent firm in Watertown, NY. In the latter year, he was elected Jefferson County Judge after an unusually competitive Republican primary. He held that post from 1931 to shortly after his election to the Supreme Court for the Fifth District in 1938. He sat as a trial judge for nine years. In February of 1948, he was appointed an Associate Justice of the Appellate Division for the Fourth Department, where he remained until mandatorily retired at the close of 1959. He died shortly thereafter on January 19, 1960.