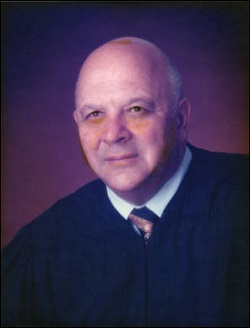 John P. Balio received his LL.B from Albany Law School. Following his admission to practice on June 21, 1949, he practiced law in Utica until 1973. He served as an Assistant Oneida County Attorney from 1956 to 1960 and as the Oneida County Attorney from 1960 to 1962. Justice Balio began his judicial career as a New Hartford Town Justice, serving in that capacity from 1970 to 1973. He served as Oneida County Family Court Judge from 1973 to 1980 and was elected to Supreme Court in 1980. He was designated to this Court on March 19, 1986 by Governor Cuomo. In addition to his Judicial duties, Justice Balio chaired the Indigent Criminal Appeals Management Council for the Fifth Judicial District and was the Court’s representative on the Advisory Committee on Attorney Admissions. He retired on December 31, 2000, and lived in New Hartford, New York and served as a Settlement Officer for the Appellate Division, Third Departmentís Civil Appeals Settlement Program. Additionally he performed pro bono work and practiced law. Justice Balio died on February 10, 2010.