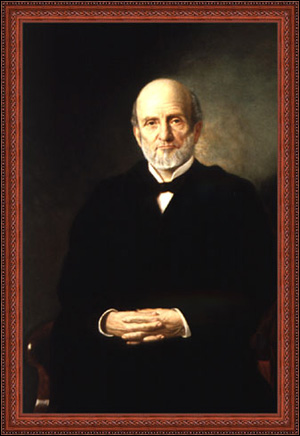 “Robert Earl, of Herkimer, is the baldest judge on the Court of Appeals bench. He had a wealth of whiskers, however, which he keeps closely cut. He sits on the right between Judges Rapallo and Finch. He is quick in thought, word and action. His eyes are mild but sharp, and when he is interested they sparkle with unusual lustre. Especially is this the case when a close game of whist1 is being contested with a friend. Judge Earl is very fond of the game.”2

The sketch was humorous, but Judge Robert Earl was known as an outstanding jurist and an active philanthropist who contributed greatly to the jurisprudence of the State of New York and to the community in his hometown of Herkimer.

Judge Earl was born on September 10, 1824 to John Earl and Margaret Petry. His ancestry came from distinguished lines of English and German families. The Earl family were descendants of Ralph Earl by way of Sir Walter Earle, one of the five knights who in 1626 resolutely resisted the arbitrary execution of forced loans by Charles I. His maternal grandfather, Dr. William Petry, gained renown in several battles against the British during the Revolutionary War. In 1777, Dr. Petry was recommended as a county judge of Tryon County (now Montgomery County) and as a justice of the peace. He was also Herkimer’s first physician3 and “the most respected of the citizens of the Mohawk Valley to the time of his death.”4

During his childhood, Judge Earl worked on his uncle’s farm with his older brother, Samuel. He attended Herkimer Academy before entering Union College in Schenectady, where he graduated in 1845 at the top of his class. Upon graduating, he began reading law with his cousin, Judge Charles Gray.5 While pursuing his law studies, he took charge of Herkimer Academy and served as its principal from 1845 to 1847. In 1848, Judge Earl was admitted to the bar and, with his brother, formed a law firm in Herkimer called S. & R. Earl.

As a young lawyer, Judge Earl was active in Herkimer politics and public affairs. In 1849, he acquired the Herkimer Democrat, a weekly political newspaper, and became its sole editor and publisher. That same year, Judge Earl was elected supervisor of Herkimer, then trustee of the village, and again supervisor in 1860. In 1855, he was elected county judge and surrogate. He became a charter member of Herkimer Lodge, No. 423, F&A.M. in 1857.

Judge Earl put his accomplishments in perspective. In a Union College Alumni Survey he wrote that “the most interesting event which I know to record was my marriage [on] Oct. 12, 1852 with Juliette L. Wilkerson, [the] only daughter of Henry J. Wilkerson Esq., of Richfield, Otsego County.”6

At the Democratic State Convention in 1868, Judge Earl’s reputation as an able lawyer and great jurist attracted the attention of such men as Hiram Denio, Francis Kernan, and Samuel J. Tilden, and they secured his nomination for Judge of the Court of Appeals. In 1869, Judge Earl was elected to succeed Judge Lewis B. Woodruff (1809-1875). He served as Chief Judge from January to July 1870 when, by virtue of a constitutional amendment, he was transferred to the Commission of Appeals while the Court underwent a reorganization under the new Constitution of 1869. Judge Earl served on the Commission until July 1875, disposing of the backlog of cases from the old Court.

In November 1875, Governor Samuel J. Tilden appointed Judge Earl to the Court of Appeals to fill the vacancy created by the death of Judge Martin Grover (1811-1875). The following November he was elected for a full 14-year term over his opponent George F. Danforth (1819-1899), who was later elected to the Court, in 1879. In 1890, after being cross-endorsed by the Democratic and Republican parties, Judge Earl was reelected, and two years later, Governor Roswell P. Flower appointed him Chief Judge to succeed William C. Ruger (1824-1892). During Judge Earl’s term on the bench, his alma maters, Union College and Columbia College, awarded him honorary law degrees in 1874 and 1888, respectively.

On December 31, 1894, by virtue of the constitutional age limitation, Judge Earl was forced to leave the Court. At the time, he was “[t]he man with the longest service to his credit in this court,” having served almost twenty-five years.7

On December 20, 1894, Judge Earl’s colleagues adopted a memorial.8 Here is an excerpt:

Especially we shall miss you at the consultation table, where the capacity to see swiftly and grasp accurately and hold firmly the rapid succession of facts and doctrines involved in the cases as they pass in review finds its most useful field of effort. You held your place there, a sentinel never asleep, a patrol always on the alert, a guard not to be eluded, and yet none of us, even when stopped or challenged, ever had reason to regret the manner of the vigilance. For, however earnest the warning, or relentless the criticism, there was always kindness and courtesy behind it, and a zeal which fully subordinated pride of opinion to the sound and stable reputation of the court. …

Be assured that you will take into your retirement our gratitude for the arduous and excellent work you have done, our appreciation of the ability which has characterized it, and beyond that, our personal respect, affection and esteem.

Judge Earl wrote over 1,000 opinions, many of which were partly or wholly new to the law of the State.9 He unfailingly exercised independent judgment, even earning the title among his colleagues as “the Dissenter”10 during the earlier part of his judicial career.

Two of his most noteworthy opinions are Stuart v. Palmer (74 NY 183 [1878]) and Riggs v. Palmer (115 NY 506 [1889]). At issue in Stuart v. Palmer was the constitutionality of an 1869 act that permitted town commissioners to impose taxes on property owners without first providing them notice or an opportunity to be heard. For the first time, the court announced the application of constitutional due process to the subject of taxes and assessments. Judge Earl wrote,

I am of opinion that the Constitution sanctions no law imposing such an assessment, without a notice to, and a hearing or an opportunity of a hearing by the owners of the property to be assessed. It is not enough that the owners may by chance have notice, or that they may as a matter of favor have a hearing. The law must require notice to them, and give them the right to a hearing and an opportunity to be heard. It matters not, upon the question of the constitutionality of such a law, that the assessment has, in fact, been fairly apportioned. The constitutional validity of law is to be tested, not by what has been done under it, but by what may, by its authority, be done. The Legislature may prescribe the kind of notice and the mode in which it shall be given but it cannot dispense with all notice.11

With similar perception and eloquence, Judge Earl described the principles of statutory construction and applied them to wills and estates law in Riggs v. Palmer (115 NY 506 [1889]). In that case the plaintiffs were contesting the inheritance of the beneficiary, who murdered the testator to take the property that the testator had left him in his will. As a case of first impression, Judge Earl explained that courts should focus on the purpose of the statute of wills, not only its literal words, in determining whether someone can murder their way into an inheritance.

The purpose of those statutes was to enable testators to dispose of their estates to the objects of their bounty at death, and to carry into effect their final wishes legally expressed; and in considering and giving effect to them this purpose must be kept in view. It was the intention of the law-makers that the donees in a will should have the property given to them. But it never could have been their intention that a donee who murdered the testator to make the will operative should have any benefit under it.12

Thus, Judge Earl determined that a person may not reap profit from wrongdoing. The case remains a bedrock principle of New York law, having been cited hundreds of times.

Judge Earl remained a respected and prominent public figure after leaving the Court. The Democratic Party offered him the nomination as the party’s candidate for Governor in 1894 and 1898, stating,

Judge Earl, though seventy years old, is still hale, hearty and full of vigor, and enjoys the respect and confidence of all classes of citizens irrespective of party. It is believed he would make an invincible candidate.13

He declined the nominations, unwilling to re-enter active political life. The leaders of both Democratic and Republican parties also held out the possibility of a seat on the United States Supreme Court, but it did not come to fruition, owing to Judge Earl’s political affiliations with the Democratic party.14 In 1901, Judge Earl was appointed referee in franchise tax cases.

After his years on the bench, Judge Earl returned to his home community. He was part of a group that formed the Herkimer Bank, which, in 1898, became the Herkimer National Bank. He also founded the Herkimer Historical Society in 1896, and as the Society’s president contributed valuable research papers and historical essays. He even encouraged the youth of Herkimer County by offering prizes for the best submitted essays. His love of community was so great that in 1896 he donated his residence and grounds for the Herkimer Free Library.15

After suffering a paralytic stroke, Judge Earl passed away on December 2, 1902, two years after the death of his wife on March 25, 1900. Upon his death, the Honorable George W. Smith, Judge Earl’s longtime friend, wrote a tribute to him, stating, in part:

The passing away of Judge Earl leaves a void which cannot soon be filled. Herkimer county will long cherish his dust as one of the most sacred of her possessions and will connect the record of his life with that of the noblest of her past worthies. The profound esteem of all his fellow men, the public gratitude and an affectionate reverence were the attendants of his closing days and were conspicuous at his death. Some trace of affection may be seen in funeral honors paid to eminent men, but in all the tokens of public feeling at the departure of Robert Earl there was a deep and solemn sincerity. Above his grave rises the halo of sadly pleasing recollections, fond regrets and memories which those who knew him will not willingly let die.16

Judge Earl had no children. At the time of his death, his immediate relatives were the children of his brother, Samuel Earl: Robert Earl, Jennie (Earl) Taber, Ralph Earl, and William P. Earl, as well as his cousins, Jacob H. Petrie and Rev. Jeremiah Petry.

Collection of various newspaper and magazine articles from the Herkimer County Historical Society.

Collection of various newspaper articles from the New York Times (1890-1902).

Eulogy of Late Judge Earl delivered by Chief Judge Parker during oral arguments on December 5, 1902 (on file with the Court of Appeals).

Judge Earl was a prolific writer, having written and delivered poems, papers, and speeches before the Herkimer County Historical Society. As with other judges long departed, the following may comprise only a partial list of his published writings.