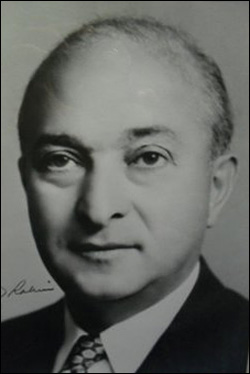 Benjamin J. Rabin was born in Rochester, New York on June 3, 1896. He attended public schools and thereafter went to work for the law firm of Stroock & Stroock. In 1915 he entered New York University Law School and was graduated in 1919, his attendance having been interrupted by service in the Navy in World War I. He attained the rank of ensign, and after the war was admitted to the Bar.

From 1919 to 1926 Rabin was employed first as a law clerk and later as managing attorney by the law firm of Greenbaum, Wolff and Ernst, and from 1926 to 1935 was in private practice.
From 1934 to 1935 he was counsel to the New York State Joint Legislative Committee investigating guaranteed mortgages, and from 1935 to 1937 he was counsel to the State Mortgage Commission. He served as chairman of that commission by appointment of Governor Lehman from 1937 to 1939.

Justice Rabin then joined the law firm of Diamond, Rabin, Botein and Mackay, which later became Poletti, Diamond, Rabin, Freidin and Mackay. During World War II, he headed the Appeals Board of the Selective Service System in the Bronx. He was elected to the U.S. House of Representatives from New York’s 24th congressional district in the Bronx in 1944 and served from 1945 until his resignation at the end of 1947, at which time he was elected to the New York State Supreme Court for a full, 14-year term. He was designated to the Appellate Division First Department by Governor Averell Harriman in 1955 and remained there until 1968.

Justice Rabin married Syd Sobel Rabin. They had no children. He died on February 22, 1969 at age 72.