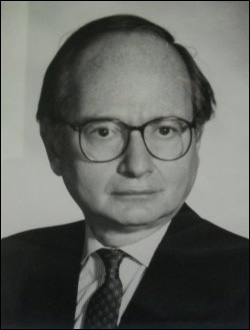 Leonard H. Sandler was born on October 16, 1926, in the Bronx and moved with his family to the Lower East Side of Manhattan when he was 8 years old. He graduated from Seward Park High School and attended City College, from which he graduated Phi Beta Kappa in 1946. After service in the Air Force, he enrolled at Columbia Law School, where he became editor of the law review.

Upon receiving his law degree in 1950, Sandler became an associate at the law firm of Cleary, Gottlieb, Friendly & Hamilton. He left there in 1954 to begin seven years as an assistant district attorney under Manhattan District Attorney Frank S. Hogan. Sandler soon became known as “the conscience of the homicide bureau.” One former colleague recalled, “He was the best law man among us. Whenever there was a question of what to charge a defendant with, we would turn to him for a careful, painstaking legal analysis.”

In 1963, Sandler became a partner in the firm of Kasanof & Sandler, specializing in criminal litigation. He remained there until 1970, at which time he was appointed to an interim term on the Civil Court. In November of that year, he was elected to a full 10-year term. Five years later, Justice Sandler was elected to the Supreme Court bench, where he remained until 1977, when he was appointed to the Appellate Division, First Department by Governor Carey. He served on that bench until his death.

Justice Sandler considered his most important opinion to have been in a 1971 case while he was a Civil Court judge, where he ruled that a tenant could not be evicted for refusing to pay rent if the landlord did not provide basic services. In 1976, he was named as presiding justice over the special grand juries that heard evidence gathered by the special state prosecutor investigating political corruption.

Prior to his judicial career, Justice Sandler had been active in liberal Democratic politics and had been a member of civil-liberties groups. The Leonard H. Sandler Fellowship in International Human Rights, open to J.D. graduates of his alma mater, Columbia Law School, was established in memory of Justice Sandler for his lifelong commitment to civil rights and liberties.

Justice Sandler was married to Alice Sandler. They had no children. He died on October 23, 1988, at age 62.