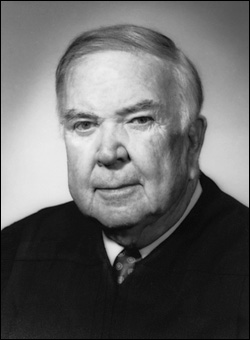 Justice Norman L. Harvey was born in Canisteo, Steuben County, on November 11, 1918. He graduated from the Canisteo Central School Class of 1935 and Syracuse University College of Law and was admitted to practice in 1948. His education was interrupted by World War II where he served as a pilot and air executive officer in the Army Air Corps completing 74 combat missions over Germany and Axis occupied Europe. In 1949, Justice Harvey was elected Mayor of Canisteo. His career was interrupted by a second tour of military duty in the Air Force during the Korean conflict when he became Commanding Officer of the 509th air refueling squadron and the 715th bomb squadron. He was later transferred to the Office of the Secretary of the Air Force in Washington, D.C., and was discharged with the rank of Colonel. Following his military service, Justice Harvey and his family moved to Plattsburgh where he became associated with the law firm of Jerry, Lewis & Harvey. He was elected to the Supreme Court, Fourth Judicial District, in 1967. He was appointed district administrative judge in 1975. Effective January 1, 1984, he was designated to the Appellate Division. He served there until his retirement in 1993. Justice Harvey died February 18, 1996, at the age of 77 in Florida, where he had moved the year before.