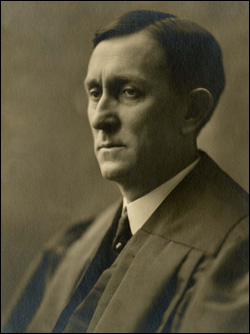 Harry L. Taylor was born on April 14, 1866 in Halsy Valley, Tioga County, New York. He was educated in public schools in Spencer & Ithaca. He then went to Cornell University from which he was graduated, Phi Beta Kappa, in 1888. He worked as a school teacher during the winter months of the period of 1888-90, attended Cornell Law School during those same seasons in three succeeding years. He received his degree in 1893. During the summer months of the period between 1888 and 1894 he was employed as a major league professional baseball player. He hung up his mitt and was admitted to the bar in January of 1894, and was hired as a clerk in the office of Marcy & Clase of Buffalo. Subsequently he undertook private practice as an associate of E. L. Falk, later acquiring an office of his own.

Taylor was appointed Erie County Judge in 1906, and returned by election the following year, a post he held until the end of 1913, while maintaining a lectureship at the University of Buffalo Law School from 1907-15. In 1913 he was elected (as a Republican) a Justice of the Supreme Court for the Eighth District, a post he held from 1914 to his mandatory retirement at the close of 1936. He was elevated to the post of Associate Justice of the Appellate Division Fourth Department on August 22, 1924, a position he retained until his retirement. After retiring, he acted as an Official Referee from 1937 to 1944. He died in Buffalo on July 12, 1955.