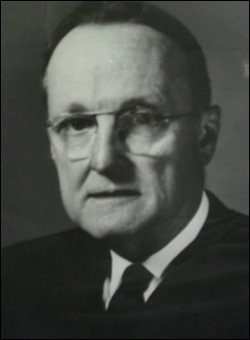 Samuel W. Eager was born in Montgomery, New York, on August 19, 1900. He was schooled in Orange County, New York, and received his law degree from Albany Law School in 1921. Thereafter, he went into private practice.

In 1929, Eager was Acting City Judge in Middletown, New York, and served as Corporation Counsel from 1930 to 1931. He was an Assistant District Attorney for Orange County from 1932 to 1934, and later served as counsel for several school districts.

Justice Eager was known as an author and editor of law books and texts, including, among others, New York Law of Wills (1934); Bender’s Forms for Consolidated Laws (8 vols., 1932-1946); Third Edition of Baylie’s Pleadings and Practice (1929); and New York Law of Chattel Mortgages, Conditional Sales and Trust Receipts (1941). Also, he wrote The Declaratory Judgment Action, Notes, Cases and Forms (1971); The Arbitration Contract and Proceedings (1971); and Reminiscences of an Orange County Lawyer and Judge (1978);

He retired in 1970 at the mandatory retirement age of 70; however, Eager was then designated to serve as temporary Justice of the Appellate Division until 1972.