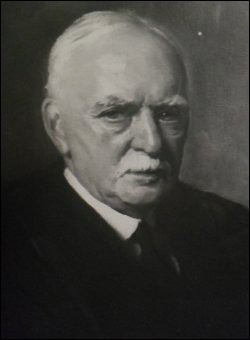 Justice O’Brien also sat on the bench of the 2nd Department; more information can be found HERE.

Morgan J. O’Brien has been described as having a winning nature. He made his mark in many areas — city and state politics, the bar, the bench, education, charity and the church. He was a prominent Catholic layman. Over the years, O’Brien has been embraced at times by both political parties, one describing him as “strong, true, upright, studious, vigorous,” while the other spoke of his “candor, kindness, and thorough excellence.” (Charles Johnston, Men of To-Day: Hon. Morgan J. O’Brien, Presiding Justice of the Appellate Division, Harper’s Weekly, March 31, 1906.)

Justice O’Brien was born April 28, 1852 in New York City, the son of a merchant who had come from southern Ireland 30 years before. After attending New York City public schools and the Christian Brothers School, he graduated in 1872 from St. John’s College with an A.B. degree. The following year he received an A.M. from St. Francis Xavier’s College. Columbia Law School was next, and he graduated in 1875 with an LL.B. His post-law school education includes an LL.D. from St. John’s College in 1887.

Upon his admission to the bar in 1875, Justice O’Brien opened his own law firm. At the same time, Justice O’Brien, who had a deep interest in educational matters, accepted a position as trustee of the public schools of New York City, a position which he held for many years. In 1887, at age 35, he was selected as corporation counsel of New York City by Mayor Hewitt. Later that year, O’Brien was elected a justice of the Supreme Court — the youngest to serve in that capacity up to that point. In 1892 he was assigned by Governor Hill as a Justice of the General Term in the First District, which he held until Governor Levi P. Morton designated him Justice in the Appellate Division First Department in 1895. In 1905, upon the death of Presiding Justice Charles H. Van Brunt, Governor Higgins designated Justice O’Brien Presiding Justice, a position from which he resigned in 1906. Throughout his long career on the bench, only a small percentage of his opinions have been reversed by higher courts.

After retirement from the judiciary, Justice O’Brien returned to his firm, acting in an advisory capacity. In 1926, he was appointed chairman of the city Planning and Survey Committee by Mayor Walker, formed to study zoning, sanitation, traffic, highways, parks, port facilities and revenue. In 1936 he became chairman of the Citizens Charter Campaign Committee which worked successfully to make known to the people of New York City the need for charter revision. As an advocate of charter reform, he led the Campaign Committee in spite of the open opposition of the local Democratic organization, and the new charter was overwhelmingly adopted.

Justice O’Brien was very active outside the judiciary in charitable and educational work. In recognition of his service as a prominent Catholic layman, he was knighted by the Pope. O’Brien was married to the former Rose M. Crimmins and they had nine children. He died at age 85 of pneumonia. His funeral was a who’s who of New York–Lehman, La Guardia, Rockefeller and Farley, to name a few.