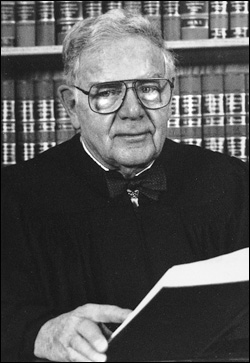 Justice Robert G. Main was born in Malone, Franklin County, on September 29, 1917. He graduated from Franklin Academy in 1935, from Peddie Preparatory School in Heightstown, New Jersey, in 1936, and from Colgate University in 1940, the year he entered Albany Law School. His law school career was interrupted by World War II: he enlisted in the United States Marine Corps and left active duty as a Major. He served in the Pacific. He graduated from Albany Law School in November 1946. For the next thirteen years, he practiced law in Malone, with firms successively named Main & Pond, Main, Pond & Main, and Main, Main & Poissant. During this period, he also served in the New York State Assembly, from 1950 to 1959. While a member of the Assembly, he was largely responsible for a bill creating the Whiteface Mountain Ski Area. In November 1959, he was elected a Supreme Court Justice for the Fourth Judicial District; he was re-elected in 1973. From 1966 to 1968, he also served as the District’s Administrative Judge. He was designated to the Appellate Division in 1973, where he served until his retirement at the age of 70 at the end of 1987. Justice Main’s father and grandfather were both Franklin County District Attorneys and his great-grandfather was also an attorney. His son, Robert G. Main, Jr., currently serves as Judge of the County, Family, and Surrogate’s Courts in Franklin County.