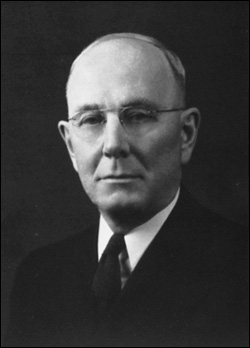 Justice William F. Santry was born on a farm at South Bay, on May 12, 1879. The farm was on the south shore of Oneida Lake. He received his elementary education at the Messengers Bay School and was graduated from Oneida (Madison County) High School in 1896, and then from Cornell University, and Cornell University Law School in 1902. He was also admitted to the Bar in 1902. In 1918, he formed a partnership with Charles Coville, which partnership continued until his appointment to the Supreme Court early in 1944 by Gov. Dewey. Prior thereto, Justice Santry had served as Oneida City Judge for three terms. He had also served as a member of the Board of Education of Oneida City High School from 1936 until 1944. He was designated to the Appellate Division effective January 1, 1949, and retired because of age at the end of 1949. He thereafter served as an Official Referee for six years. At the age of 76, he returned to practice law in Oneida in his old firm. He died on July 20, 1966, at the age of 87.