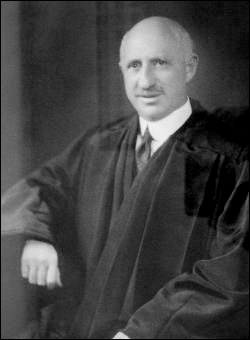 It was said of Justice Henry L. Sherman that “He was one of the outstanding jurists of the day . . . His opinions are noted for the soundness of their philosophy and for the clarity of their expression. They will ever remain as a monument to his greatness.” (Sherman Mourned by Fellow Judges, New York Times, July 13, 1933, p. 19.)

Henry L. Sherman was born on December 5, 1870 in New York City but moved to Griffin, Georgia with his family, where he received his early education. Sherman graduated from Yale in 1890 and began law school at Columbia, later transferring to New York University Law School, from which he graduated in 1892.

He first worked as a law clerk and then joined the firm of Hotaling, Lauterbach & Johnson. In later years he was a member of the firm of Hirsch, Sherman & Limburg, where he remained for 18 years. During that time he was counsel for Knickerbocker Trust Company in its reorganization at the time of the 1907 panic. Sherman also served as delegate to the Democratic National Convention in 1912, which nominated Woodrow Wilson.

In 1924, when Justice John V. McAvoy was appointed a Moreland Act commissioner by Governor Alfred E. Smith to investigate the Transit Commission, McAvoy appointed Henry L. Sherman as official counsel for the investigation. As a result of that work, Sherman was offered the position as counsel to the Transit Commission, but turned it down knowing that he might be in line for one of the three Tammany nominations for Justice of the Supreme Court in the 1st Judicial District. He was elected to that bench in 1927. He was appointed to the Appellate Division First Department in 1930, where he remained until his death in 1933.

Justice Sherman provided one of the highlights of the Hofstadter legislative committee’s investigation of the New York City government when, after receiving a telephone call at his summer home in Lake Placid from John F. Curry, leader of Tammany Hall, he granted a stay to Dr. William F. Doyle, a former Fire Department veterinarian who was appealing a 30-day sentence for contempt of the committee. Justice Sherman came under the notice of the executive committee of the Bar Association in an investigation it made of the affair. The committee reported that it had failed to find “anything which reflects upon the impartiality, integrity or judicial conduct of Mr. Justice Sherman.” Mr. Curry’s part was termed an “intrusion,” which was “unfortunate, to say the least.”

Justice Sherman was married to Edna L. Sherman, and they had three children. He died at age 63 on July 11, 1933, after a long illness.