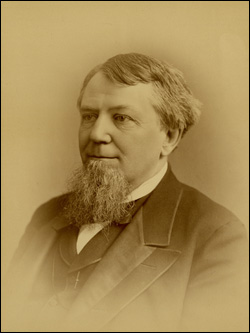 After a period out of office, Hardin was elected to the Supreme Court for the Fifth District in November of 1871. He functioned as a trial judge for the nine years before his elevation to the Appellate General Term for the Fourth Department in 1879. He acted as an Associate Justice thereupon for the next three years. On June 2nd, 1884, the departments of the state were reconstituted, with the Fourth Department being redefined as encompassing the Fifth and Sixth Judicial Districts, while the Seventh and Eighth were placed within the new Fifth Department. Hardin was appointed Presiding Justice of the General Term of the new Fourth Department, a post he held until the organization of the Appellate Division on January 21st, 1896. In this latter re-organization, the Fifth department was dissolved, and the Fourth re-acquired its original boundaries. Hardin remained Presiding Justice of the Fourth Department until his mandatory retirement at the close of 1899. He died on April 16, 1901, in Ilion, New York.