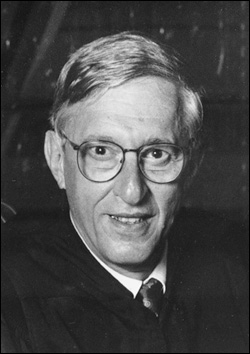 In 1993, Judge Levine was appointed to the Court of Appeals. See his full biography HERE.

Judge Howard A. Levine was born in Troy on March 4, 1932. He graduated from Yale Law School in 1956, the same year he was admitted to the New York State Bar. He was elected in 1970 to Schenectady County Family Court, a position he held until 1980. That year, he was elected a Supreme Court Justice for the Fourth Judicial District. Effective at the beginning of 1982, he was designated to the Appellate Division, Third Department. On August 13, 1993, Gov. Cuomo appointed him to the Court of Appeals. He became the 200th jurist to sit on the Court of Appeals since it was founded in 1846. He retired at the end of 2002 and joined an Albany law firm.