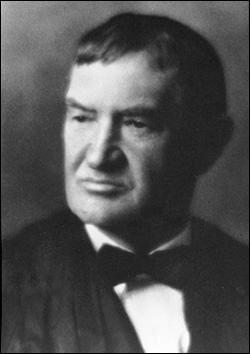 Justice Wesley O. Howard was born in Troy on September 11, 1863. At an early age, because of the death of both of his parents, he was moved to his grandfather’s mountain farm in the town of Grafton in Rensselaer County and he attended the district school there. He attended the Lansingburgh Academy and afterwards taught school in order to obtain means to further pursue his studies. He studied law in the office of Robertson, Foster & Kelly in Troy and afterwards in the office of W.W. Morrill, when he was admitted to the Bar. At the age of 21, he was elected Justice of the Peace of the Town of Grafton. In 1894, he was attorney for the Rensselaer County Board of Supervisors. In 1896, he was elected Rensselaer County District Attorney, and was re-elected in 1899. In the fall of 1902, he was elected to the Third Judicial District Supreme Court, succeeding Justice Fursman, whose term had expired. He served on the Appellate Division for four years, beginning in 1913. After his re-election to the Supreme Court in 1916, he voluntarily returned to the trial bench at the end of the year. In 1920, he was a potential gubernatorial nominee of the Republican Party. He retired from the bench in 1925. He died on May 11, 1933, from injuries.