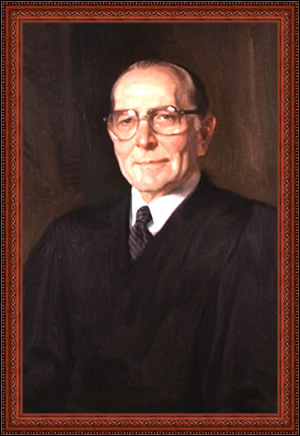 Judge Domenick Gabrielli was noted for the practicality, clarity, and wisdom of his opinions, and for the compassion and respect he showed to people of all walks of life. His practicality and compassion grew out of the strength of his family, the experiences of his youth, and a lifetime of public service.

Domenick Luciano Gabrielli was born in Rochester on December 13, 1912, the year his parents Rocco and Veronica emigrated from Monte San Giovanni, a small mountain town south of Rome. Three years later the family moved to Bath, on New York’s Southern Tier, where they lived with another family of Italians until they could get on their feet.

Rocco, like many immigrants, initially worked on the railroad. Later, he owned and operated a bus line, consisting of a single bus, which serviced rural Steuben County. When the family was able to purchase their own house, they took in boarders to help with expenses. Veronica prepared meals for the boarders, and worked in the local cannery.

Hard work and perseverance were a way of life for the future judge. Mike, as he was known, began his association with the law as a boy, shining shoes on the steps of the Steuben County Courthouse. Years later he would maintain his Court of Appeals Chambers in the building next door.

The character and compassion of the young Mike Gabrielli were forged in the loving and nurturing environment of his close-knit immigrant family, and the small-town environment of his youth. However, he also experienced the challenges of his immigrant background. There were occasional flashes of anti-immigrant prejudice from elements of the rural community. As a young boy, the future judge peered out his window to see a cross burning on the lawn of his Catholic church in their small immigrant neighborhood. Through the occasional scrapes, bruises, and challenges that young Mike faced, his father would repeatedly remind him “sempre avanti,” always upward and onward. This served as a guidepost to the future judge to never give up, never fall back, and always move forward.

As a youth, Mike Gabrielli took these early lessons to heart. He persevered and thrived. With his gentle good humor, keen intellect, and hard work, he garnered the friendship and admiration of his classmates and the members of his community in Bath, where he returned after completing his education to become a beloved and respected community leader.

Following his graduation from high school in Bath, he studied engineering at Clarkson University. After a year of engineering, he recognized that the humanities and the law were his calling. He then went on to study at St. Lawrence University in Canton, New York.

The future judge pursued his college studies during the height of Prohibition in the United States. Canada had a more enlightened view. The adventuresome Mike Gabrielli and his classmates would occasionally broaden their college educations with a night of international travel.

As a small-town practitioner, Gabrielli handled a full range of legal problems for a diverse client base. In one early case, he defended a local resident, Alvie Dart, who was caught by the local conservation officer allegedly fishing with illegal gill nets on Lake Keuka. The conservation officer identified Alvie by the license plate on his car. The young Gabrielli won cheers from the audience, and an acquittal for his client, when the conservation officer admitted on cross-examination that he couldn’t recall the number of his own license plate. No charges were filed a month later when Alvie blew off part of his arm fishing with dynamite on the lake.

When World War II broke out, Mike Gabrielli enlisted and served with distinction as a Naval Officer. He served on Gibraltar, participated in the landing at Salerno, and was assigned to serve as a liaison with the British Navy.

During the war, Lieutenant Gabrielli served in naval intelligence. While stationed in Italy, he once commandeered a truck, loaded it with food, and brought it to his parents’ town of Monte San Giovanni. The townspeople had suffered for months with limited provisions, and hailed the young naval officer as a hero. Throughout the succeeding decades, Judge Gabrielli generously donated to the local church and charities.

When the war ended, Mike Gabrielli returned to Bath to practice law, also serving as Corporation Counsel to the City of Bath between 1937 and 1953. He immersed himself again in community affairs, heading many local clubs and civic organizations.

In 1953, Governor Dewey appointed the future judge District Attorney of Steuben County, when the sitting District Attorney was elected to the State Senate. Mike Gabrielli won a full term in the next general election.

In 1957, Judge Gabrielli was elected Steuben County Court Judge and Children’s Court Judge. Like many jurists, he was often troubled by the difficulties of presiding over cases involving children, where the law was challenged to find solutions for the problems of broken and dysfunctional families.

The election for Court of Appeals judgeships in 1972 took an unexpected turn. Three seats were open in that year. There had been few hotly contested races since the election of 1940, when four candidates vied for three seats.1 Since that election, the Democrats and Republicans usually cross-endorsed the same candidate.

Governor Nelson Rockefeller handpicked the three Republican nominees, Justice Domenick Gabrielli of the Fourth Department, State Supreme Court Justice Sol Wachtler, and Hugh R. Jones, the former President of the State Bar Association.3 Judge Gabrielli led the slate as the three Republican candidates swept to victory in a field of seven candidates in 1972.3 Richard Nixon was reelected to the Presidency in a landslide over Democratic nominee Senator George McGovern of South Dakota.

Judge Gabrielli was most proud of the numerous endorsements he received in the election from prominent Democrats in the state.

In 1974, Judge Gabrielli was considered for the Republican nomination for Lieutenant Governor under incumbent Governor Malcolm Wilson, based in large part upon his strong political skills and the recognition he received in his successful statewide campaign for the Court of Appeals. High-ranking sources were quoted as saying that the job was his if he was willing to leave the bench.4 However, his love for the bench prevailed, and he remained on the Court.

During his years on the Court of Appeals, Judge Gabrielli’s opinions were marked by their practicality and clarity. From the fullness of his personal experiences, he could well appreciate the nuances of complex societal problems. In an opinion considering the constitutionality of limited preferential policies based on race, he cautioned that they should be carefully tailored and temporary in duration, and observed that “preferential policies, laudable in origin and goal, may be laden with substantial detrimental side effects which make their use undesirable.” Alevy v. Downstate Med. Center, 39 NY2d 326, 337 (1977).

He was a frequent dissenter as the Court of Appeals departed from the Supreme Court’s interpretation of the Sixth Amendment to fashion New York’s more expansive right to counsel protections. He often drew on his experience as District Attorney and County Court Judge in forming his opinions.

While on the Court, and throughout his long career, Judge Gabrielli was revered for his connection to the people he encountered. He often brought pastries to the custodial and security staff of the Courthouse after attending daily mass at St. Mary’s Church behind the Courthouse. He was able to discuss from memory with townspeople in Bath and staff in each of the courthouses where he worked details of their children and families.

At his home chambers in Bath, it often took him an hour at noon to walk the one block to the lunch counter, because he would stop to talk to anyone who wanted a word with him. He frequently reminded his children and law clerks to “never forget where you came from.”

Judge Gabrielli retired from the bench in 1982 when he reached the mandatory retirement age of 70. In his remarks upon Judge Gabrielli’s retirement, Chief Judge Lawrence H. Cooke described the manner in which Judge Gabrielli approached life and the way others approached him, when he said, “[y]ou love everyone openly and unabashedly and the reciprocation of that love is universal.”5

Judge Gabrielli died on March 25, 1994, and was buried at the Holy Sepulchre Cemetery in Bath. In her remarks to the Court following Judge Gabrielli’s death, Chief Judge Judith S. Kaye captured the essence of his character when she said:

Though he rose to stellar heights of professional success and truly fulfilled the American dream, he was always mindful and indeed proud of where he came from, and his relations with others revealed a deep belief in the essential dignity of all people. As revered a figure as Judge GABRIELLI could surely have been forgiven occasional moments of self-importance, but such displays were wholly foreign to him.6

His colleague and close friend, Judge Joseph W. Bellacosa, in remarks delivered at a Mass of the Resurrection offered at St. Mary’s Church in Bath, honored Judge Gabrielli’s memory by describing his friend in the following way:

He always reached out to everyone at every station in life with respect, real interest, affection and a helping hand. With those central, essential characteristics, he remains for us all a model as lawyers and as judges. Much more importantly, he is a model for how human beings ought to behave throughout their lives.7

Justices Elected or Appointed to the Court of Appeals, The Historical Society of the Courts of the State of New York, www.courts.state.ny.us/history/elecbook/3ddepthist/pg15.htm.

Three of Seven Places on the Court of Appeals Are at Stake in the Only Statewide Contest, The New York Times, Nov. 5, 1972, available in ProQuest Historical Newspapers.