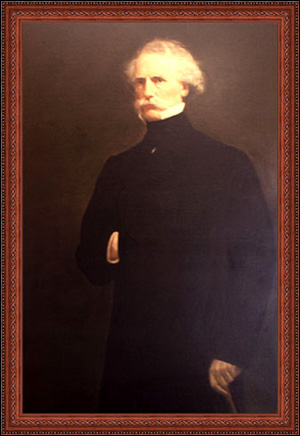 Rufus Wheeler Peckham, Sr., though a distinguished politician, lawyer, and jurist, may be most best known for how he died.

On November 22, 1873, three years after assuming his position as an associate judge of the Court, Judge Peckham, described by the memorial to him in the New York Reports as “worn out by the arduous and unremitting labors of his office, and hoping to find in change of scene and climate and in a short respite from his duties recuperated energies and renewed vigor,” left for Europe with his wife on the steamer Ville Du Havre.1 During the ill-fated crossing, the Ville du Havre collided with the Scottish steamer Loch Earn in the North Atlantic. Though the ship was one of the most advanced of its day-replete with the newest devices to ensure the greatest possible speed and safety as well as luxurious accommodations for the comfort of passengers-it could not withstand the force of the 1,200 ton Loch Earn, which collided with the Ville du Havre at full speed. The night of the crash was bitterly cold and four-fifths of the men, women, and children on board perished at sea. According to Chadbourne’s Public Service of the State of New York, at the time of the disaster Judge Peckham heroically stood on the deck of the sinking ship with “a group of dependent and shrinking friends . . . looking to him for comfort and sustaining power” before he declared “‘if we are to go down, let us go down bravely!'” Judge Peckham and his wife, Caroline, were among the 226 passengers and crew who perished in the accident.

At the time of his tragic death, Rufus W. Peckham, Sr., was only three years into his term as an Associate Judge of the Court of Appeals, but his political and legal career was already well-established.

Born in Rensselaerville, New York on December 20, 1809, Judge Peckham was raised near Cooperstown, where he spent his childhood on the eastern bank of the Susquehanna river. After preparing for college at Hartwick Seminary in Otsego County, he entered Union College in 1825 and graduated with honors two years later at the tender age of eighteen, an accomplished scholar of Classics.2 Judge Peckham managed to attain academic distinction despite the great amount of time he spent as a member of the celebrated military organization of the Union College Cadets, assuming the West Point uniform. He was a lieutenant of one of the battalion’s companies and devoted himself to perfecting various military tactics. The militaristic mien he developed as a Union College Cadet may, however, have proven more lasting than his academic studies; acquaintances often noted his military bearing and personal discipline (though his austere exterior was frequently described as hiding a warm and tender heart).

Upon graduation from Union College, Judge Peckham moved to Utica where an elder brother-a physician-lived. There, Judge Peckham read law with Bronson & Beardsley, a firm of Greene C. Bronson and Samuel Beardsley, each later subsequently a chief judge of the Supreme Court of New York. At that time, the bar of Oneida County was replete with accomplished legal advocates whose trials the young Peckham would study, thereby supplementing his formal training with Bronson & Beardsley. Peckham developed an intimate working and personal rapport with both Messrs. Bronson and Beardsley, but was particularly close with Beardsley, who appears to have treated him as a “promising younger brother,” according to a memoriam prepared by a committee of the bar of the State of New York. Indeed, in 1857, when Mr. Beardsley was a practicing lawyer preparing in the State Library for oral argument before the Court of Appeals on the noted case of Curtis v. Leavitt (15 NY 9 [1857]), Peckham would visit the library every day and encourage Beardsley to “come, old friend, throw away those books, and come out and take a trot with me!” (Committed to his preparation, Beardsley declined every invitation.) In the Spring of 1859 Peckham even visited Beardsley in Europe.

Peckham was admitted to the New York State bar in 1830, at which time he moved to Albany and entered private practice with his older brother George W. Peckham and their brother-in-law Joseph Colt. The two Peckham brothers enjoyed a great friendship as well as a successful working relationship, and often in preparing cases would lose themselves in mock arguments, one liberally assaulting the other as freely as though he were a detested rival. Their compatibility served the firm well, and the firm of Peckhams & Cole had a vibrant private law practice, representing many of the most interesting cases of the day. Peckham was, by all accounts, a formidable adversary.3

In 1838, Governor William Learned Marcy (1833-1839) appointed Peckham District Attorney for the City and County of Albany. Judge Peckham served in this capacity for three years, during which time he prosecuted the celebrated Rector murder case. Rector’s prior murder conviction having been vacated, he faced retrial, defended by two of the ablest advocates of the day, Ambrose L. Jordan and Henry G. Wheaton. Though Peckham was young and inexperienced, he trounced his more seasoned opponents and secured a guilty verdict.

In 1845 Peckham ran against John Van Buren for Attorney General of the State of New York, an election at that time determined by a joint ballot of the state legislature, losing by one vote. However, he had an opportunity to continue in public service when, in the fall of 1852, he was elected a member of Congress as a Democrat from Albany, taking his seat in the first year of President Franklin Pierce’s administration (1853-1857). Peckham served as the United States Representative from New York, 14th District for the 33rd Congress, and demonstrated an independent streak, refusing to be constrained by his party affiliation. As a Congressman, Judge Peckham strongly opposed the 1854 Kansas and Nebraska Act, which left the question of slavery in the two proposed territories of Kansas and Nebraska to the settlers themselves-in contradiction of the provisions of the Missouri Compromise, under which slavery would be barred in new territories north of latitude 36º30′. In a famous two-hour speech on the floor of Congress in May 1854, Peckham, prescient in his belief that the Kansas and Nebraska Act would prove nationally divisive, opposed the measure allowing settlers to determine the legality of slavery. It is a testament to Judge Peckham’s powers of advocacy that, though his position was at odds with nearly all members of his political party and most members of the House of Representatives, many admirers among his fellow Congressman on all sides flocked to offer their congratulations upon his oratorical success.

After his term in Congress ended, Judge Peckham returned to Albany and resumed the practice of law, associating himself with the very accomplished lawyer and, later, State Attorney General, Speaker of the New York State Assembly and United States Representative Lyman Tremain. Tremain & Peckham was a successful commercial law firm with a vibrant practice. Eulogizing Judge Peckham, Tremain described his former law partner as

Of tall and commanding form, with remarkable dignity and gentlemanly courtesy, nature had stamped upon him the impress of true nobility. . . . He was a thoroughbred lawyer, admirably trained in the principles and practices of his profession. Possessing rare powers of discrimination, united with a soundness of judgment almost infallible, he had the wonderful faculty of seizing, as by intuition, the strong and controlling points of the case on trial, and, by stripping it of all irrelevant matter, exercising both at the bar and upon the bench, most extraordinary power over a jury.

The private practice, though lucrative, did not satisfy Judge Peckham’s interest in public service. He again ran for office in 1857, this time for the office of justice of the Supreme Court. Though defeated in 1857, he ran again in 1859(4) and was elected to an eight-year term by a large majority, defeating the well-known and well-respected judge Ira Harris.5 Judge Peckham was re-nominated after his eight year term, and won reelection unopposed. As a Supreme Court justice Judge Peckham became famous for his strong expressions and his “spectral finger,” wagged frequently at parties with whom he disagreed. As one story goes, during the trial of one Mr. Gordon for the murder of one Mr. Thompson, Judge Peckham took the rough hay-baling stick that was the alleged murder weapon and, convinced of Gordon’s guilt, made a strong charge against the defendant. Upon asking his friend and fellow judge John K. Porter6 “what do you think of that charge,” Judge Porter replied “I must say that I think you have killed Gordon as effectually as he killed Thompson, and with just about as blunt a weapon.”7 In 1866 Judge Peckham sat as an ex officio judge of the Court of Appeals and then, four years later, midway through his second term as a Supreme Court justice, was elected an associate judge of the Court of Appeals. According to some of his colleagues, after taking office in 1870, Judge Peckham discovered that the solitary work of an appellate court judge was rather less to his liking than that of a trial court judge.

After Judge Peckham’s untimely death, a series of eulogies were held throughout the state, with speakers representing all parts of Judge Peckham’s life. While his body was lost at sea, a cenotaph at Albany Rural Cemetery in Menands, New York memorializes the life of this great member of the Court of Appeals. Judge Peckham and his wife Caroline, the daughter of the former rector of Saint Peter’s Parish in Albany, were survived by two sons. The fine legal reputation of Rufus Wheeler Peckham, Sr. would be carried forward by those sons, Wheeler Hazard Peckham and future United States Supreme Court Justice Rufus Wheeler Peckham, Jr.

Rufus W. Peckham, Sr. was survived by his two sons, Wheeler and Rufus Jr. The only living descendent presently identified is Rufus W. Peckham, Jr., an attorney in the Washington, D.C. area.

Collection of newspaper obituaries in the New York State Library.

Speech of Mr. Peckham of New York: On the Kansas and Nebraska Question: delivered in the House of Representatives, May 18, 1854.

Speech of Mr. Peckham of New York: On the Kansas and Nebraska Question: delivered in the House of Representatives, May 18, 1854.