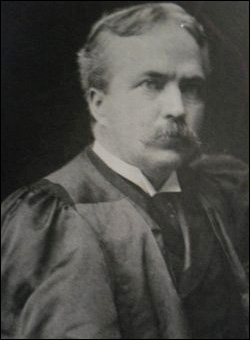 Justice Laughlin also sat on the bench of the 4th Department; more information can be found HERE.

It was said of Justice Frank C. Laughlin that “he is a man of great learning, of a clear and penetrating intellect, of remarkable industry and skill in the dispatch of business.” (Editorial, New York Times, November 21, 1919.)

Born in Newstead, New York on July 20, 1859, Justice Laughlin attended the Lockport Union School and went on to study law in a Buffalo law office. He was admitted to the Bar in 1881 and became active in city government in Buffalo. Between 1885 and 1893 he served as Assistant City Attorney and then as City Attorney. He served as Corporation Counsel from 1894 to 1895, whereupon he was elected Justice of the Supreme Court of the 8th Judicial District in 1896. He was re-elected in 1909 for a term expiring December 31, 1923.

In 1923, Governor Smith directed the State Attorney General Carl Sherman to supersede the Nassau County District Attorney and investigate charges of misconduct by county officials in connection with illicit liquor traffic. Mr. Laughlin was named Special Deputy Attorney General by Mr. Sherman for the investigation. A number of officials were convicted as a result, but the high courts reversed some of those convictions.

In 1937, as an arbitrator under agreement between the Realty Advisory Board and Local 32B of the Building Service Employees Union, Mr. Laughlin awarded increases in wages and vacations with pay for more than 50,000 building service employees in 3,000 apartments and loft and office buildings in New York City.