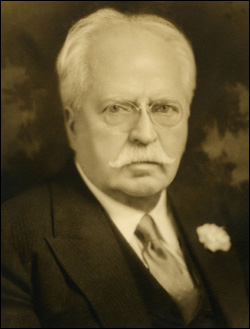 Justice Laughlin also sat on the bench of the 1st Department; more information can be found HERE.

Frank C. Laughlin was born in Newstead, NY on July 20th, 1859, the son of Irish immigrants. He moved with his family to Lockport, NY in 1865, where he divided his time between the Union School in the winter and the family farm in the summer. He subsequently studied law in the offices of J. E. Pound and was admitted to the bar in June of 1882.

Having moved to Buffalo, Laughlin initially practiced law in a prosperous local firm. In 1885 he was hired, without his application, as an Assistant City Attorney. In short order he was promoted to City Attorney, and in 1890 was the Republican candidate for Corporation Counsel of Buffalo. He lost the election and returned to private practice in 1891. In 1892 he received his vindication being elected Corporation Counsel over the man who had defeated him two years earlier. He resigned that post in 1895 following his election to the Supreme Court for the Eighth District. Laughlin sat as a trial judge from 1896 to the close of 1899, then as an Associate Justice of the Appellate Division for the Fourth Department for sixteen months in 1900-190l, and in the same capacity in the First Department from
May 1st, 1900 to August 1st, 1922. On the latter date he resigned from the Supreme Court. He practiced in partnership from that time until his death in Buffalo on January 18th, 1943.