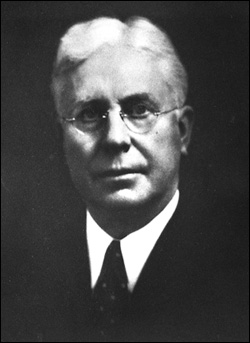 Justice Pierce H. Russell was born in Troy on May 25, 1878. He studied in the public schools, graduated from Troy Academy in 1896, and from Williams College in Massachusetts in 1900. For three years, he was supervising principal of a public school district in Troy comprising four public schools, while at the same time teaching some classes. Meanwhile, he studied law and was admitted to practice in 1903. The next year, he served as clerk to County Court Judge M.A. Tierney. In 1905, he served as Troy Corporation Counsel. He was elected Rensselaer County Judge in 1915 for a six-year term and then was re-elected. As County Judge he also presided over the Rensselaer County Children’s Court. On January 1, 1926, he became an elected Justice of the Supreme Court for the Third Judicial District; he was re-elected in 1939. In 1947, he was designated to the Appellate Division by Gov. Dewey, where he served until his retirement at the age of 70 at the end of 1948. Justice Russell died June 4, 1952, of a heart attack while conducting a transit strike hearing in Rochester.