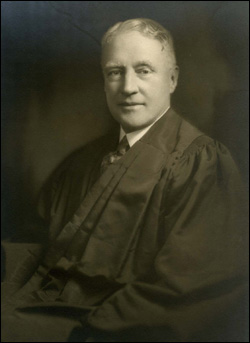 Ernest I. Edgcomb was born in Cortland, New York on January 10th, 1867. His family was affluent and influential. He received a bachelor’s degree from Syracuse University in 1889 and a Master’s degree in 1895. He was also elected to Phi Beta Kappa. He read law with Godelle & Nottingham, a patrician firm and was admitted to the bar on September 11, 1891. He acquired a reputation as a lawyer with an unusual rapport with juries during a career in private practice that spanned the period from 1891-1922 and ran through several partnerships. He was also an instructor in civil procedure at Syracuse Law School from 1903-20.

During this period (1891-1922) Edgcomb was a devoted Republican Party member, serving in a series of party positions, public offices and patronage posts. He was at one point or another a town supervisor, president of the Onondaga County Board of Supervisors, Surveyor of Customs for the Port of Syracuse, and an attorney for the State Comptroller and State Tax Commission. He was appointed a Justice of the Supreme Court for the Fifth District on January 24, 1922. He was twice returned by election. He presided as a trial judge for nearly seven years until his elevation to the Appellate Division for the Fourth Department on Nov. 7, 1928. There he remained until his mandatory retirement at the close of 1937. He acted as an Official Referee from 1938 until his death in Syracuse on June 7, 1943.