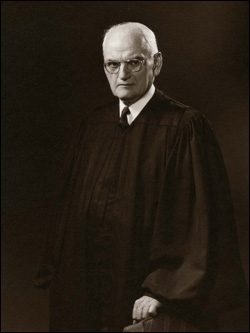 William E. McClusky was born on November 15th, 1894 in Syracuse, New York, the son of a lawyer. He attended Catholic schools as a youth and received his bachelor’s degree from the College of the Holy Cross in 1915. He graduated from the Syracuse University College of Law in 1918 and was admitted to the bar
on the 18th of November of that year. He later returned to Holy Cross College, receiving a master’s degree in 1920. He worked briefly as an examiner and receiver for the Bureau of War Risk Insurance before embarking on a career in partnership with his father which lasted from 1920 to 1938.

McClusky, a devout Catholic, served as Chairman of Catholic Charities of Syracuse for more than twenty years, occupied the presidency of the New York State Conference on Social Work for a time, and was a member or officer in an array of civic or charitable organizations in addition to his work in the Republican Party. His first political office was a stint as special counsel to the Syracuse Housing Authority in 1939 and 1940. Following this, he was twice elected to the post of Judge of the Syracuse City Court, holding office from 1942 to his election to the Supreme Court for the Fifth District in 1949. As a Justice, McClusky was occupied with trial work throughout the 1950’s. On January 1st, 1960,
he was elevated to the Appellate Division for the Fourth Department, on which he remained until the close of 1963. Re-elected that year, he declined re-appointment to the appellate court, spending the year preceding his statutory retirement as a trial judge. He functioned as a retired justice of the court until his complete retirement at the close of 1966. He died in Syracuse on April 20th, 1967.