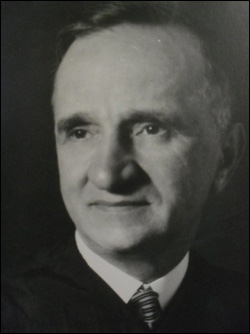 Justice Albert Cohn served as a mentor to future Appellate Division Justice Martin M. Frank, who eulogized Cohn citing his “lifetime of superlative public service. Judges and lawyers in generations still to come will quote his words in high authority; words impressed upon the pages of volumes of judicial reports that encompass three decades; words that were the fruit of his wisdom, reason and legal craftsmanship.” (Service for Cohn Attended by 1,000, New York Times, January 10, 1959, p. 17.)

Albert Cohn was born in New York City on December 20, 1885. He received a B.A. from City College in 1904 and embarked on a teaching career in New York City public schools while attending New York Law School. Upon graduation, he was admitted to the Bar in 1908.

He was named Assistant District Attorney of Bronx County in 1917 by District Attorney Francis Martin. Six years later, he was named Chief Assistant D.A. by D.A. Edward J. Glennon. Following his career as a prosecutor, Cohn was named Bronx County Judge by Governor Smith in 1925 to fill a vacancy. He was elected to that office later that year. As a County Judge, he was active in rehabilitating youthful first offenders.

One of Justice Cohn’s more notable decisions stripped control of amateur boxing in New York from the Amateur Athletic Union and placed it under control of the New York State Athletic Commission. Also, he participated in the decision forcing former Mayor Vincent R. Impellitteri to make public a report he had been withholding on an investigation of charges of corruption in the administration of penal institutions.

Justice Cohn retired in 1955 and began practicing with his son Roy, who gained prominence as the chief counsel to the Senate Permanent Subcommittee on Investigations when Senator Joseph R. McCarthy was chairman.