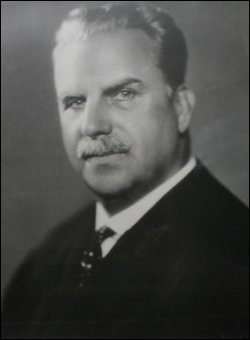 William P. Burr was born in Dublin, Ireland on March 30, 1856. He came to the U.S. as a young man and attended St. James College in Baltimore, graduating in 1873. He went on to Columbia Law School and graduated in 1879. Private law practice followed.

Before his appointment and election to the bench, Mr. Burr served in various capacities. He was a delegate to the New York State Constitutional Convention of 1894. From 1904 through 1914 he was Assistant Corporation Counsel of New York City. During that time he was in charge of the Department of Franchises and conducted many important cases, one of which brought him national notoriety. This was the “eighty-cent gas” litigation which he prepared and tried. The U.S. Supreme Court heard the case in 1909 and the result was a victory for the public. He also prepared litigation against the New York Centrail Railroad to force the removal of the tracks on Eleventh Avenue, so-called “Death Avenue.” It was Burr’s handling of this case that was the reason Corporation Counsel Frank L. Polk asked for his resignation. A controversy followed between Mr. Polk and Justice Burr. In 1918, Justice Burr was appointed Corporation Counsel by Mayor Hylan.

In 1920 Burr was appointed to the Supreme Court bench and was elected later that year to a term ending December 31, 1926. He was designated to the Appellate Division by Governor Smith in 1924, where he sat until his mandatory retirement at age 70 in 1926. While on that bench, he authored the opinion, in which all his colleagues concurred, that declared null and void the home-rule law passed in Albnay. He wrote that the constitutional amendment on which the law was based had not been legally adopted. A few months later, the Court of Appeals unanimously reversed this decision. After retiring from the Appellate Division, Justice Burr served as an official referee of the Supreme Court from 1927 until his death in 1930.

Justice Burr married Jennie Philomene Lynch Burr in 1884. They had five children. He died suddenly on November 13, 1930 of heart disease at age 74.