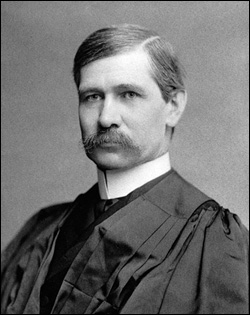 Justice Alden Chester was born at Westford in Otsego County on September 4, 1848. He was educated in the local schools and at Westford Literary Institute. He taught at the Institute and became a store clerk in his native village. At the age of 18, he was a telegraph operator on the Albany and Susquehanna Railroad. He was also the editor of a newspaper in Otsego County and then, for a time, an insurance clerk in Boston. He then took up the study of law at Columbia University Law School, from which he graduated in 1871. He was also admitted to the Bar in 1871, in New York City. He began practicing in Albany with a cousin, Andrew S. Draper, until 1887. Draper later became president of the University of Illinois and the first Commissioner of Education of the State of New York. From 1876 to 1882, Hon. William S. Paddock was also a member of the firm, under the name Paddock, Draper & Chester. From 1887 until 1895, he practiced alone. In 1895, he was elected to the Third Judicial District Supreme Court; he was re-elected in 1909 at the end of his first 14-year term. He was designated to the Appellate Division by Gov. Odell and served from 1902 to 1909. (He also served one day in 1913 in place of Justice John M. Kellogg.) Although he was the senior associate justice in 1909 and would normally have continued on the Appellate Division and had good prospect of being appointed Presiding Justice, he returned to the trial bench at the behest of Gov. Hughes to help clear an unusual backlog of cases; he worked so assiduously at this task that he became ill and had to sojourn in Europe for several months to completely recover. He retired from the bench at the end of 1918, having reached 70 years of age. In addition to his judicial career, Justice Chester served as deputy clerk of the New York State Assembly from 1874 to 1876; as a member of the Board of Public Instruction of Albany from 1881 to 1884 (and as its president in 1884); as an assistant United States Attorney for the Northern District of New York from 1882 to 1885; and as an assistant corporation counsel of the City of Albany from 1894 to 1895. He also served as president of the Albany Medical College, a trustee of the Albany College of Pharmacy, a governor of Union University, and a special lecturer on the Federal judicial system at Albany Law School. He was president of the American Bar Association in 1919. He could trace his ancestry back to English settlers in the early to mid 1600s on both his maternal and paternal sides. On his mother’s side, he was descended from Elder William Brewster, who came to America on the Mayflower. Both of his grandfathers were Revolutionary War soldiers and his maternal grandfather was at the battle of Bunker Hill. Justice Chester died February 12, 1934. Among the cases he handled on the trial bench were the “Ice Trust”, “Coal Trust”, and “Beef Trust” cases which attracted much attention throughout the country. He also presided over a large number of murder trials, prominent among which was that of the three Van Wormer brothers at Hudson for killing their uncle, Peter A. Hallenbeck, on Christmas Eve, 1901, and which resulted in the conviction of all three of murder in the first degree and their subsequent execution. Justice Chester was the author/editor of two noteworthy multivolume works: “The Legal and Judicial History of New York”, published by the National Americana Society, New York, 1911 (2 volumes); and “Courts and Lawyers of New York: A History”, published by the American Historical Society, New York and Chicago, 1925 (4 volumes).