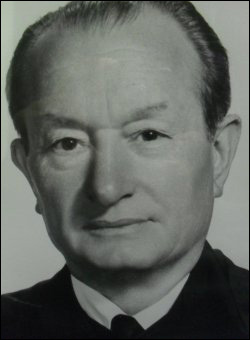 Justice Emilio Nunez was a pioneer in New York’s judicial system. He was the first Hispanic judge in New York and the first Hispanic to hold the successive offices to which he was appointed or elected. He was also a founding member of the Puerto Rican Bar Association, an organization which each year recognizes deserving individuals with the Emilio Nunez Award for Judicial Excellence.

Born in Bilbao, Spain, on June 29, 1904, Nunez came to the United States at age 11 with his family, settling in Bridgeport, Connecticut. He became interested in the law when, as a young teenager, he acted as interpreter in court for his fellow immigrants from Spain. Eventually he moved to New York, where he received his law degree from New York Law School in 1927.

In his law practice he was counsel for a number of South American governments as well as the government of Spain. In 1951, New York City Mayor Vincent Impellitteri appointed Nunez a New York City Magistrate. He was promoted to the Court of Special Sessions in 1952 and served there until early 1956, when he was appointed by Governor Averell Harriman as a Judge of the City Court. In November of that year he was elected to a full ten-year term. Nunez was appointed as an acting Supreme Court Justice in 1957, serving until 1962, when he was elected to the Supreme Court. In 1968, Governor Nelson Rockefeller appointed him to the Appellate Division First Department, where he served until his retirement in 1977.

Justice Nunez presided over a variety of cases, from crimes to labor disputes, including a lengthy strike by the United Federation of Teachers in 1967 and a walkout by building maintenance workers in 1970. In the teachers’ strike, he enforced for the first time the Taylor Law (which prohibits strikes by public employees), imposing a 15-day jail sentence on the president of the United Federation of Teachers, and fining the union $150,000. The heart of his finding is represented by the following quote from the decision: “Law means nothing unless it means the same law for all. This strike by a powerful union against the public was a rebellion against the government; if permitted to succeed it would eventually destroy government with resultant anarchy and chaos.”

Justice Nunez was married to Carmina Garcia Nunez, with whom he had three children. He died on July 6, 1995, at the age of 91.