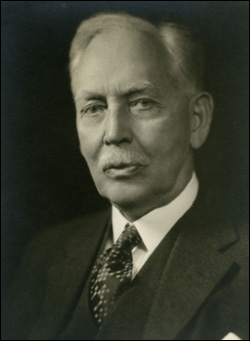 Nathaniel Foote was born on November 15, 1849 at Morrisville, Madison County, NY. He came from an influential family, and was the tenth descendent with that name. His interest in family genealogy led him to organize and direct for a while an organization he called the “Foote Family Association of America.” He went to Cazenovia Seminary, Genesee Wesleyan Seminary, and Hamilton College, receiving a Bachelor’s Degree from the latter in 1870. Following this, he was briefly an instructor of Classics at Monticello Academy, after which he was admitted to the bar at Binghamton on December 8, 1870.

After two years of practice with his father, Foote moved to Rochester in 1873. He aided in organizing a partnership in 1874 in which he practiced for thirty-one years. During this period he was a founder and first president of the Rochester Bar Association (1892-94) and a delegate to the Constitutional Convention of 1894.

Foote was appointed to the Supreme Court for the Seventh District in January of 1905, and returned by election the same year. He sat as a trial judge for seven years before being elevated to the Appellate Division for the Fourth Department in January of 1912, there to remain until his mandatory retirement
at the end of 1919. For twenty years thereafter, he functioned as an Official Referee and an associate of a local law firm, finally giving up work at the age of 90. He died in Rochester on January 26, 1944.