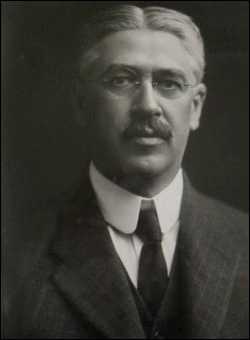 In 1913, Judge Miller was appointed to the Court of Appeals. See his full biography HERE.

Judge Miller also sat on the bench of the 2nd Department; more information can be found HERE.

It is said that Justice Miller, the “economy governor”, is probably better known for his term as a cost-cutting state leader than for his time on the Court of Appeals. (Smith Denounces Miller as Servant of ‘Big Interests’, New York Times, Oct. 6, 1922, p.1.)

Born October 10, 1868 in Solon, New York, to Samuel and Almera Miller, Justice Miller was one of three children. After graduating from Cortland Normal School in 1887, he became a public school teacher. In an effort to save enough money to attend college, he took a second job as a law clerk at the firm of Smith & Dickinson. He studied every free moment, and soon the firm recognized his knowledge of the law and began having him try cases in Justice Court, where admission to the bar was not required for litigation.

In 1893, Justice Miller was admitted to the New York bar, and in 1899 he became a partner in the law firm of Dougherty and Miller, where he remained until 1903. He joined the Republican Party despite the fact that his father and grandfather were Democrats. At a Republican meeting, he was called to fill in for the scheduled speaker and was so impressive that he became the county committee’s regular stump speaker.

Justice Miller remained involved in the Republican Party, serving on the executive committee of the Republican State Committee in 1920, a delegate-at-large to the Republican National Convention in Chicago, and also made the nominating speech for Herbert Hoover that same year. He was also president of the New York State Bar Association for the years 1920-1921.

Justice Miller entered the gubernatorial race in 1920 and defeated incumbent Democrat Alfred E. Smith. He ran on a conservative platform and believed in limited government. Justice Miller served as the 43rd governor of New York for a two year term (1921-1922) and greatly reduced the budget by eliminating many state jobs he deemed unnecessary. While governor, he devised the law which established the New York City Transit Commission, reformed the Interborough Rapid Transit, altered the management of state prison industries, promoted child hygiene clinics and the use of water power as electricity. Justice Miller’s strong economic beliefs prompted him to personally pay for all repairs and renovations to the governor’s mansion. However, these cost-cutting measures lessened his popularity, and Justice Miller was not reelected when he ran against Al Smith again in 1922. When his term as governor was nearing an end, Justice Miller learned that Chief Justice William H. Taft planned to recommend him for appointment as an associate justice to the United States Supreme Court. However, Justice Miller declined the offer since he had already agreed to enter into a law partnership. Twenty years would pass before another Republican was elected governor of New York.

From 1925 until his death, Justice Miller served as a general counsel, a director and a finance committee member of the United States Steel Corporation. Throughout the years, he was frequently retained as counsel by other lawyers and became known as a “lawyer’s lawyer.”

Justice Miller was married Elizabeth Davern Miller in 1896 and had seven daughters. He died of pneumonia at the age of 86 on June 26, 1953, after fracturing his hip. At the time of his death, Justice Miller had 23 grandchildren and 10 great-grandchildren.

The Judges of the New York Court of Appeals, Fordham University Press, The Historical Society of the Courts of the State of New York, 2007.