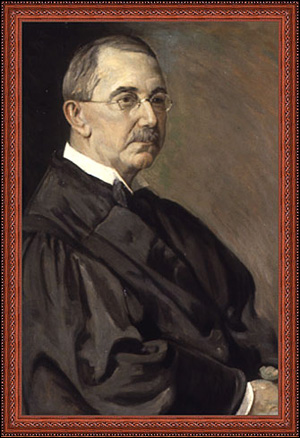 In looking back on William H. Cuddeback’s life, the Court described him as “wise and impartial in decision,” with no shadow of partisanship falling “upon the clear record of his judicial life.”1 Although he had been elected to the Court of Appeals in 1912 on the ticket headed by Governor William Sulzer, Judge Cuddeback, shortly after his appointment, nevertheless voted “guilty” on each of three articles of impeachment against the Governor.2

A descendant of Jacques Caudebec, a Huguenot who fled to America from France at the time of the repeal of the Edict of Nantes (in 1685), Cuddeback was born in Cuddebackville,3 Orange County on March 23, 1852, the son of Lewis Cuddeback and Caroline Thompson, daughter of a Presbyterian minister in Rockland County. He became a resident of Goshen when his father was elected Court Clerk in 1867. After graduating from Goshen Academy, Cuddeback entered Cornell University, graduating in 1874. He studied law in the office of Judge Gedney in Goshen, and was admitted to the bar in 1876. He practiced in Goshen as a member of the firm Wadsworth, Murray and Cuddeback, and was also a Justice of the Peace. In 1884, Cuddeback successfully represented his father as appellant in a case argued before the Court of Appeals (Cuddeback v. Sherman, 95 NY 661 [1884]).

Relocating to Buffalo in 1885, Cuddeback formed a partnership with Judge Joseph V. Seaver and, later, with Judge Daniel J. Kenefick. He was chairman of the Democratic Committee of Erie County from 1895 to 1897 and Corporation Counsel for the City of Buffalo from 1898-1902. On his watch, negligence damages decided against the City totaled only $7,900. Cuddeback’s practical disposition showed itself when, during a dispute over back taxes on land leased for the Pan-American Exposition, he allowed judgment to be taken against the City cancelling the taxes. The effective date of the law providing relief on such taxes was unclear, and the chances of ever collecting the $10,000 owed in taxes were dismal. During his term as Corporation Counsel, Cuddeback drafted what was known as the “Cuddeback charter.”4 He was a litigant in a case before the Appellate Division in which he sought, unsuccessfully, to compel the Erie County Clerk to file certain certificates of nomination for ward offices.5

In 1912, Cuddeback was elected to the Court of Appeals by the largest plurality ever-up to that time-for a Judge of the Court. While serving, Cuddeback authored a number of noteworthy opinions. In De Carvalho v. Brunner (223 NY 284 [1918]), the Court decided that joint and several liability applied in a situation where a pedestrian was killed by a one-horse truck that was passing a two-horse truck, both of which, witnesses said, were traveling “at about the same rate of speed as an ambulance or fire engine ‘responding to an emergency fire call.'” In People v. Frudenberg (209 NY 218 [1913]), the Court upheld a New York City ordinance making it a misdemeanor offense for failing to immediately clean empty milk bottles. Cuddeback’s decisions in which constitutional questions were raised were unanimously affirmed by the Supreme Court of the United States.

Judge Cuddeback left little time for relaxation and recreation, and “he took no rest which was not enforced.”6 He was of “frail constitution,” and suffered for years from ill-health.7 Even so, his disposition was described as “cheerful and friendly,” and those who knew him well “never heard him utter an unkind word nor make a sharp retort.”8 The year before his death, Cuddeback suffered a stroke, but without complaint continued with his judicial labor and did not succumb to his poor health until the year’s work was completed. During the Court’s recess in August 1919, at the age of 67, Judge Cuddeback passed away, during a flu epidemic, while visiting his sister in Goshen. He died on the same date as his father had 30 years earlier.

Judge Cuddeback was a Mason, and the family (collateral descendants) still has his top hat, his Mason’s apron, and other memorabilia. Judge Cuddeback’s father built the Cuddebackville Reformed Church and the Cuddeback School. Both are on the same parcel behind the house in which the Judge was born. The property is located at the junction of Routes 209 and 211.

His colleagues remembered his opinions well:

In them direct and simple thought finds plain and calm expression without the use of superfluous words. Free alike from the adornments of rhetoric and the display of research which at times illumine the prosaic pages of judicial decisions, his style indicates the unconvoluted working of his mind. . . . He was not disposed to dogmatize, nor did pride of opinion affect his final judgment.9

Judge William H. Cuddeback never married and had no children.