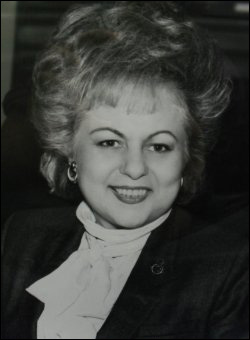 “She may be petite, but pound for pound (or in her case, ounce for ounce), Betty Weinberg Ellerin packs more legal punch in her tiny frame than most legal titans who swagger through the hallways of New York’s greatest law firms.” (Carla T. Main, War Stories 2007: Betty Weinberg Ellerin, New York Law Journal Magazine, September 2007, p. 30.)

Upon her appointment as Deputy Chief Administrative Judge for the Courts of the City of New York in 1982, Judge Betty Ellerin said, “E.R.A. may be foundering elsewhere in the country, but equal rights for minorities and women is alive and kicking in New York.” She, better than anyone would know this, having experienced a number of “firsts” for women in New York: first woman to hold the aforementioned administrator’s post; first woman to be appointed Associate Justice of the Appellate Division, First Department; first woman to be appointed Presiding Justice of the Appellate Division, First Department; and founding member and director of the Women’s Bar Association of the State of New York.

In 1955, Justice Ellerin began her career with the courts, serving as Law Secretary to various Supreme Court Justices over the next 21 years. From 1977 to 1978, she served as Judge of the Civil Court of the City of New York, assigned to Criminal Court, New York County. She became Acting Supreme Court Justice in 1978 and was elected Justice of the Supreme Court in November 1979, serving on the bench from 1980 to 1981. The following year Chief Judge Lawrence Cooke appointed Judge Ellerin as Deputy Chief Administrative Judge for the New York City Courts, with administrative responsibility for the operation of all trial courts within the City. She was the first woman appointed to that position.

Justice Ellerin remained as administrator until 1985, at which time Governor Mario Cuomo appointed her as Associate Justice of the Appellate Division, First Department — again, the first woman appointed to that position. She celebrated another “first” when Governor George Pataki appointed her as the first female Presiding Justice of the Appellate Division, First Department. Although only in that position for one year because of mandatory age limits, Justice Ellerin remained as an Additional Justice until her retirement from the bench in 2005.

In 2006 she joined the law firm of Alston & Bird as Senior Counsel. At the same time, she is active in several bar groups and committees. She is currently Chair of the New York State Judicial Committee on Women in the Courts; Vice Chair of the Committee on Character and Fitness of the Appellate Division, First Department; Vice Chair of the Advisory Committee on Judicial Ethics; founder and director of the Women’s Bar Association of the State of New York; past President of the New York Women’s Bar Association; past President of the National Association of Women Judges and past Chair of its National Task Force on Gender Bias in the Courts; and a panelist with JAMS (Judicial Arbitration and Mediation).

Over the years, Justice Ellerin has received numerous professional awards, most notably the Margaret Brent Women Lawyers of Achievement Award from the American Bar Association Commission on Women in the Profession, and the Louis J. Capozzoli Gavel Award from the New York County Lawyers’ Association.

Justice Ellerin is married to Milton H. Ellerin, and they have three grown children.