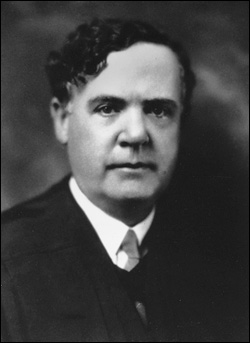 Justice Daniel V. McNamee was born October 13, 1874, in Chatham, Columbia County. He studied in the local public schools in Philmont, Columbia County, through eighth grade. At the age of 14, he went to work in the Philmont Aken Knitting Mills, running a jackwinder. He worked from before sunrise until after sunset six days a week and in the evenings studied Latin with the local parish priest. He also played horn in the local band to earn money. He earned and saved enough to attend Claverack College and graduate in 1894. He was a teacher in the public schools from 1894 to 1896. From this employment he earned and saved enough to attend Yale Law School, from which he graduated in 1898. He was hired by a New York City law firm but shortly thereafter entered the practice of law at Philmont and then moved to Hudson in 1901. He was County Judge of Columbia County from 1913 to 1919. Gov. Smith named him manager of the State Training School for Girls in 1926, a post he held until 1929, when Gov. Roosevelt appointed him to the Supreme Court. He was elected to the court that same year and was appointed to the Appellate Division in 1932 and reappointed by Gov. Lehman effective January 1, 1937. He died on May 31, 1939, while still a member of the appellate court. Justice McNamee was compiler and editor of a book entitled, “Columbia County in the World War,” containing 1,400 biographies and 1,000 portraits of soldiers, sailors, marines and nurses of the county who served in World War I.