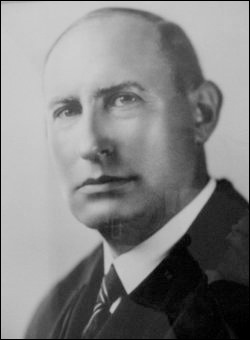 In a Letter to the Editor of the New York Times upon the passing of Justice Shientag, Mr. James McGurrin wrote: “While Bernard L. Shientag will be remembered chiefly as a judge of outstanding ability and impeccable integrity, there are many who will think of him as one of our foremost public-spirited citizens. He was a liberal in the truest and finest sense of the term. Nearly thirty years ago, as State Industrial Commissioner, he revealed the broad humanitarian sympathies that influenced the whole course of his later life.” (Tribute to Justice Shientag, Letters to the Editor, New York Times, May 29, 1952, p. 26.) He was known for his keen interest in the welfare of workers and children.

Bernard Lloyd Shientag was born in New York City on April 13, 1887. He attended public schools and graduated from City College in 1904. In 1908 he received a Master’s degree from the School of Political Science at Columbia University, was graduated from Columbia Law School and was admitted to the Bar. He went on to become a member of the law firm James, Schell & Elkus.

Shientag became interested in public service early on, and his first job was Assistant Counsel to the New York State Factory Investigating Commission. He served from 1911 through 1915. During that time he became acquainted and closely associated with Alfred E. Smith, future governor, who was vice chairman of that commission. In 1913, Shientag was also assistant to State Senator Robert F. Wagner. From 1917 to 1918 he served as assistant to Governor Smith, who at the time was President of the New York Board of Aldermen.

Governor Smith appointed Shientag Chief Counsel of the New York State Industrial Commission in 1919. He was responsible for drafting a number of measures in the Labor Code, which he later administered as State Industrial Commissioner and head of the State Labor Department in 1923 (again appointed by Governor Smith). During that year he also served at different times as a member and counsel of the State Housing Commission, the Child Welfare Commission and the Cloak and Suit Industry Mediation Commission, and he was named Federal Director of Employment of the State of New York.

Justice Shientag’s judicial career began in 1924 when he was appointed by Governor Smith to the City Court bench to fill a vacancy. He was elected to that position the following year, and spent six years there until 1930, when Governor Roosevelt appointed him to the Supreme Court bench. He was later elected to that bench for a full, 14-year term. Shientag was designated to the Appellate Term from 1934 to 1935 and also 1938.

In 1947 Governor Dewey appointed Justice Shientag to the Appellate Division First Department, where he sat until his death in 1952. In 1950 he was one of the justices who disbarred Alger Hiss from the practice of law in New York. In another case, he ruled that certified public accountants who give advice to taxpayers and interpret income tax laws are not practicing law illegally.

Justice Shientag authored a number of books and essays on legal topics. Included in these are:
Trial of a Civil Jury Action in New York, Summary Judgment, Moulders of Legal Thought, The Personality of the Judge, and Opinions and Writings of Judge Benjamin N. Cardozo.

Justice Shientag was married in 1938 to Florence Perlow Shientag. They had no children. He died of a heart attack on May 23, 1952 at age 65