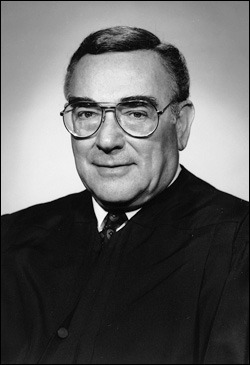 Presiding Justice Leonard A. Weiss was born in Rochester, Pennsylvania, and grew up in Buffalo. His undergraduate education at the University of Buffalo was interrupted by Army service during World War II. After the war, Presiding Justice Weiss entered Albany Law School and graduated in 1948; he was admitted to practice that same year. From 1948 to 1978, he engaged in the general practice of law in Albany. In 1977, he was appointed a part-time Albany City Court Justice and was later elected to a full term on the City Court. In 1978, Presiding Justice Weiss was elected to the Supreme Court for the Third Judicial District (and re-elected in 1992). He was appointed to the Appellate Division in 1981 by Gov. Carey and designated Presiding Justice at the beginning of 1992 by Gov. Cuomo. He served in the latter position until the end of 1993, when he had to resign the post because he had reached the mandatory retirement age of 70. He then continued on the Appellate Division as a certificated justice. In 1994, he retired from the Court. He then entered the private practice of law with the Albany firm of McNamee, Lochner, Titus & Williams.