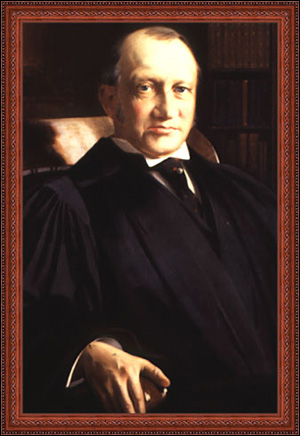 On February 2, 1914, Governor Martin H. Glynn made two nominations to the Court of Appeals.1 No one could have predicted that it would mark not only the start of a long and brilliant judicial career for one of the nominees, Benjamin Cardozo, and for the other, the culmination of a stellar legal career and the very end of his life. Judge Cardozo served for 18 years on the Court (six as Chief Judge), followed by six more on the United States Supreme Court.

The other nominee was William B. Hornblower, who, because of his prominence at the time, received top billing when the New York Times reported the nominations.2 In his comments at the Court on June 16, 1914, the day of Judge Hornblower’s death, Chief Judge Willard Bartlett lamented that the Judge “was destined to perform only one week of judicial service here.”3 The remarkable brevity of Judge Hornblower’s membership on the Court-the shortest by far of any other judge in Court of Appeals history-was matched by his renown as one of America’s foremost lawyers.

Judge Hornblower entered this world on May 13, 1851, with uncommon gifts of intellect and family lineage, and made the most of them. His father, William H. Hornblower, was a prominent Presbyterian minister in Patterson, New Jersey, and later a Professor of Sacred Rhetoric at Western Theological Seminary in Allegheny, Pennsylvania.4 He was an elector for Abraham Lincoln and Hannibal Hamlin in 1860, and a stalwart opponent of slavery.

The Judge’s great-grandfather, Josiah Hornblower (1729-1809) was an engineer who, in 1753, brought the first steam engine over from England to pump water out of the copper mines in Passaic, New Jersey. He married and settled in New Jersey, had 12 children, and worked for his adopted country in various ways, including service as a delegate to the Continental Congress. His son (Judge Hornblower’s grandfather), Joseph C. Hornblower (1777-1864) was Chief Justice of the Supreme Court of New Jersey. Judge Hornblower’s uncle, Joseph P. Bradley (1813-1892), was a Justice of the United States Supreme Court. Another uncle, Lewis B. Woodruff (1809-1875), served on the New York Court of Appeals in 1868 and, later, on the Federal Circuit Court.

Under the influence of his judge-uncles he decided on a career in law, and in 1875 graduated from Columbia Law School and was admitted to the bar. His family was largely Republican, but by the time he was at law school he had converted and would become a “sound money Democrat.” It was not long before his practice began to flourish, and he argued his maiden case in the Court of Appeals (Atlantic State Bank v. Savery, 82 NY 291 [1880]).

On April 26, 1882, he married Susan Craney Sanford, the daughter of a New Haven banker. They were to have three children before she died in 1886. One of the children, George Sanford Hornblower, a lawyer and poet, would survive the judge.

In 1888, Judge Hornblower and a partner opened the doors of their firm (Hornblower & Byrne), which evolved into today’s firm of Willkie, Farr & Gallagher. Shortly thereafter, he was approached about an appointment to the New York Court of Appeals for the vacancy occasioned by Judge Charles Rapallo‘s death. After some indecision, Judge Hornblower withdrew his name from consideration because he “had a family of young children growing up on [his] hands who would have to be educated, clothed and cared for, and the salary of a Judge of the Court of Appeals while adequate for the present would hardly suffice for the growing needs of [his] family in the future and would at best require a life of rigid economy.”5 Two years later, Governor David B. Hill appointed Hornblower to a commission that planned the reorganization of the New York courts.

By 1893 Hornblower had become one of the nation’s most eminent lawyers, representing railroads, insurance companies, and Thomas Edison. When United States Supreme Court Justice Samuel Blatchford died in 1893, President Grover Cleveland submitted Hornblower’s name to the Senate to fill the vacancy. But this was not to be. The proposed appointment was blocked by United States Senators from New York David B. Hill (who had been governor) and Edward Murphy, Jr., owing to their feud with President Cleveland.6 There is a suggestion they thwarted the nomination in retaliation for Hornblower’s having played a key role in opposing the election of Isaac Maynard to the Court of Appeals.7

Judge Hornblower took ill and suffered heart trouble, causing him to tender his resignation shortly after he joined the Court.8 His condition worsened and in his 64th year he died in his summer home in Litchfield, Connecticut, on June 17, 1914,9 and was buried in Woodlawn Cemetery.10

Address in History of the Court of Common Pleas of the City and County of New York (James Wilton Brooks, ed., 1896).

The Independence of the Judiciary, The Safeguard of Free Institutions, 22 Yale LJ 1 (1912).

Some Legal Problems of the Twentieth Century, paper read before the Pennsylvania Bar Association (1899).

The Common Sense of the Common Law, Address at Commencement of Dickinson College School of Law (Carlisle, Pa, June 7, 1898).

Remarks on the Proposed Code of Evidence Before the Committee on Codes of the Assembly of the State of New York, March 12, 1890 (CG Burgoyne 1890).

Corporations Under the Civil Code: Abstract of Argument Before the Judiciary Committees of the Senate and Assembly of the State of New York on Behalf of the Bar of the City of New York, New York (1888), reprinted in The Making of Modern Law (Gale 2005).

Negotiable Instruments and Trusts, Memoranda as to the Proposed “Civil Code” Submitted to the Committee of the Bar Association of the City of New York, Appointed to Oppose the Enactment of the “Code” (New York, Mar. 11, 1884).

Report of the Committee on the Amendment of the Law Upon the Proposed Civil Code, Ass’n of the Bar of the City of NY (Mar 15, 1881) (Written with Clifford A. Hand, Frederick R. Coudert, Elial F. Hall, Charles C. Beaman, Jr., and David McClure).