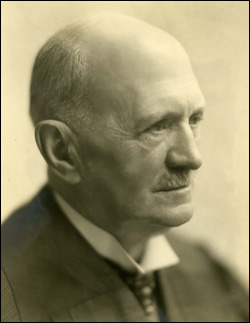 S. Nelson Sawyer was born on October 6, 1858 in Palmyra, New York. He attended the Classical Union School of Palmyra, Phillips Andover Academy, and Albany Law School, from the last of which he received a degree in 1883. He was admitted to the bar the same year and practiced alone and in partnership for six years.

It was during this time that Sawyer held several minor elective posts, sitting as Justice of the Peace, Village Clerk, and Village President of Palmyra. Subsequently, he was twice elected District Attorney for Wayne County, holding office from 1889 to the close of 1894. He was twice elected to the post of Wayne County Judge and Surrogate, which he held from 1898 to his appointment to the Supreme Court for the Seventh District in the Spring of 1907. He was subsequently twice elected to this court, on which he remained until his mandatory retirement at the close of 1928. The bulk of his tenure was as a trial judge, with only the period from November 1926 to his retirement spent on the bench of the Appellate Division, Fourth Department. In 1929, Sawyer received an honorary LLD Degree from Hobart and William Smith College. In the same year he was appointed an Official Referee, a post he held until his death on May 1, 1939, in Palmyra. Outside of his legal career, Sawyer was very active in the Grand Lodge of New York, F & A. M., in which he served as an officer from 1901-09 and received the prestigious title “Most Worshipful Grand Master.” As Grand Master he was deeply involved a number of building projects, most notably the Tompkins Chapel at the Masonic Care Community of New York. In 1910 the “Past Masters Club” presented
the community with an oil on canvass portrait of Sawyer, which was to be hung in the new chapel after its dedication the following year.