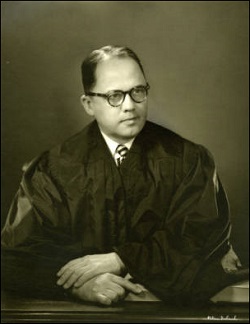 Justice Bastow also sat on the bench of the 4th Department; more information can be found HERE.

Earle C. Bastow was born in Petersburg, New York, in 1898. He graduated from Albany Law School and was admitted to the Bar in 1921. Private practice followed with the law firm of Lee & Dowling in Utica, where he remained until his appointment as an Assistant District Attorney in 1932. He was elected District Attorney of Oneida County in 1942.

Early on, as a Supreme Court Justice, Bastow was named by Governor Dewey to preside over an extraordinary term of Supreme Court to investigate official corruption in the city of Ogdensburg. After the first year, the first trial resulting from that investigation took place, and a former Ogdensburg police chief and a slot machine distributor were found guilty of conspiracy in a slot machine racket and sentenced to one year in jail and fined $500 each.

While at the Appellate Division First Department, Justice Bastow was critical in one of his written opinions of the “time-consuming procedures” adopted in some matrimonial trials. He stated that, though the issues in the case were comparatively simple, the trial — which took more than a year to complete — represented an “almost classic example” of unnecessary delay in matrimonial proceedings. The trial was recessed several times.

In 1973, Justice Bastow was appointed by Chief Judge Charles D. Breitel of the Court of Appeals to a committee of eight former judges and lawyers to recruit a new administrator for the state’s court system. In 1977, the Court of Appeals appointed Bastow amicus curiae in a case concerning New York City to represent the interest of thousands of owners of short-term notes that were frozen by a moratorium that was declared unconstitutional by that Court.