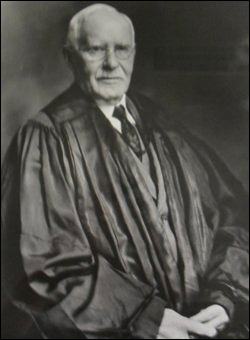 Justice Lambert also sat on the bench of the 4th Department; more information can be found HERE.

Born in Johnsonville, New York on February 4, 1851, John S. Lambert attended Greenwich (NY) Academy and then studied law at the firm of Morris and Russell in Fredonia. He was admitted to the Bar in 1877 and went into private practice, first in Maysville then in Fredonia. He was active in county government as a member of the Chautauqua Board of Supervisors from 1880 to 1881. In 1882 he became a County Judge in Chautauqua, serving for the next 7 years.

Lambert was elected to the Supreme Court bench of the 8th Judicial District in 1890. In 1903 he was re-elected, having been nominated by both parties. He was assigned to the Appellate Division First Department in 1906 and was subsequently named to the Appellate Division Fourth Department, where he served until his retirement at age 70 in 1921. After retirement he served as a referee of the Supreme Court.

As a Supreme Court Justice, Lambert presided over two sensational cases: the Molineux murder retrial and the Hearst mayoralty recount trial. The Molineux trial ended in acquittal; Molineux was later committed to an insane asylum where he died in 1917. In the other case, William Randolph Hearst ran for mayor in 1905 (on the Municipal Ownership League ticket) and was defeated. He demanded a recount, and protracted litigation brought the opening of ballot boxes before Justice Lambert and a jury. The resulting decision after the recount was that he lost to Mayor George B. McClellan, a Democrat.

Justice Lambert married Winifred Phillips Lambert and had two daughters, Ruth and Margaret. He passed away after a long illness on July 16, 1936 at age 85.