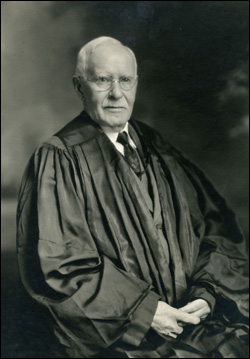 Justice Lambert also sat on the bench of the 1st Department; more information can be found HERE.

John S. Lambert was born in Washington County, NY in 1851. Around 1863 he moved from home to his brother’s farmstead near Mayville, Chautaugua County, New York. About five years afterward he was hired as a Clerk to the Surrogate of Chautaugua County, into whose home he moved. Three or four years later he began the study of law in the office of Senator Lorenzo Morris in Fredonia, while also working as a handyman at the Senator’s house. He was admitted to the bar in 1877 and taken on as a member of the Morris firm. He maintained a private practice for the next twelve years, during some of which time
he held office as Supervisor of the Town of Pomfret.

Lambert was twice elected Chautauqua County Judge, presiding from 1883 to the close of 1889. He resigned his post to take office as a Justice of the Supreme Court for the Eighth District, to which he had first been elected. He was twice re-elected, sitting from 1890 to his mandatory retirement at the end of 1921. His most notable case as a trial judge was one in which he was imported as a presumably impartial outsider to preside over a trial on the recount of the votes in the McClelland v. Hearst mayoralty contest in New York City. He ruled in favor of the initial tally of the election inspectors.

Lambert was elevated to the Appellate Division of the Fourth Department in October of 1912, and there he remained until his retirement nine years later. Following his departure, he acted as an official referee until his death in Fredonia in September of 1936.