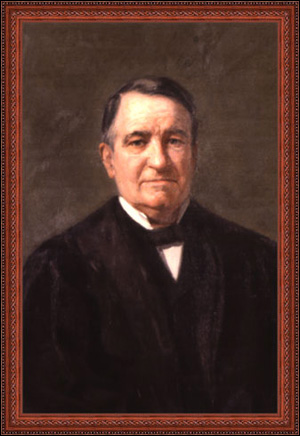 To paraphrase President Abraham Lincoln, it is altogether fitting and proper that we find an increased dedication to the cause for which New York Court of Appeals Judge George F. Danforth gave his last full measure of devotion – namely, the noble and just practice of law. In 1899, ten years after his constitutionally-required retirement from the Court of Appeals, Judge Danforth was stricken after concluding an argument before the State Supreme Court in Rochester, New York, and died hours later. At his Court of Appeals memorial, it was noted that “it was an appropriate end to so great a legal career that he should be called to his last account while expounding the law in a court of justice.”1 Moreover, it is appropriate to associate President Lincoln’s words with Judge Danforth, as the Judge was steadfastly committed to the equal treatment of African-Americans in the post-Civil War era, a position expressed thoughtfully, eloquently, and – ultimately – correctly in his dissent in People ex rel. King v. Gallagher (93 NY 438, 458-466 [1883] ). Rejecting the majority’s holding – which upheld the constitutionality of separate but equal education laws in New York – Judge Danforth stated that “it cannot . . . be doubted that [separate but equal education] when enforced by law against the wish of the colored race, is directly calculated to keep alive the prejudice against color from which sprung many of the evils for the suppression of which the fourteenth amendment and our own civil rights statute were enacted” (id. at 645).2

George Franklin Danforth was born in Boston, Massachusetts on July 5, 1819. He graduated from Union College in Schenectady, New York, and later, while on the Court, served as the President of the Union College Alumni Association. After graduation, Danforth studied law with Jasper W. Gilbert of Rochester, who would later become a Kings County Supreme Court Justice.3 Shortly after his arrival in Rochester, Danforth played an integral role in the establishment of the First Unitarian Congregation Society of Rochester.

Judge Danforth’s reputation for hard-work and integrity grew, especially in the Rochester area. His profile was raised considerably by his involvement with a suit in connection with the Elmira Reformatory. Representing New York State, he doggedly pursued the case and garnered a verdict enabling the State to avoid fulfillment of inflated and extravagant contracts for construction of the Reformatory, saving the taxpayers over one million dollars.4 This reputation stood him in good stead when, in 1875, he was the Republican nominee for Attorney General. Although he lost, he received the support of a great number of Monroe County Democrats.5

In 1876, after his name was floated as a possible gubernatorial candidate, the Republicans nominated him as a candidate for the Court of Appeals. During that campaign, political opponents characterized Danforth as a friend of the corrupt New York City Democratic machine run by “Boss” Tweed, and he lost to Judge Robert Earl. However, in 1878, he was elected to the Court in a wave of anti-Tammany Hall sentiment in New York, and pro-Republican sentiment nationwide.6 His election to the Court of Appeals was broadly heralded. The Albany Law Journal stated that his election “adds to [the Court] a man every way worthy of the position. He possesses . . . that power and turn of mind and cast of character which go to make the ‘judge’ par excellence. So long as such men are elected to judicial office, the arguments in favor of an appointive judiciary will be robbed of their force.”7

While on the Court, Judge Danforth authored a number of notable decisions in addition to his Gallagher dissent. His decision in Story v. New York Elevated R.R. (90 NY 122 [1882]), which addressed the rights of plaintiffs contending that the construction of an elevated railroad would interfere with access to and enjoyment of their properties, as well as access to light and air, established the concept of nuisance claim as a property right. Cited nearly 400 times by courts and legal scholars, Judge Danforth’s opinion continues to be a staple of treatises and articles examining eminent domain. Similarly, his decision in Duplex Safety Boiler Co. v. Garden (101 NY 387 [1886]) – which stated “that which the law will say a contacting party ought in reason to be satisfied with, the law will say he is satisfied with” (id. at 390) – is a cornerstone citation in a number of contracts treatises.

Judge Danforth’s time on the Court of Appeals also marked the appearance of several fixtures that remain with the Court. In January of 1884, the Court first heard arguments in the grand and wonderful courtroom it occupies today, although, at the time, the courtroom was on the third floor of the State Capital; it was not until 1917 that the courtroom was painstakingly relocated to the Court of Appeals Hall. David Dudley Field, the driving force behind the New York Code of Procedure, had the privilege of being the first attorney to address the Court in the new courtroom, and he presented resolutions on behalf of the New York State Bar Association suggesting that the Judges wear formal robes. The following month, the Judges donned robes, and continue to do so.

When he left the Court, owing to his age, the prominent legal publication The Green Bag stated that “[i]f all men were like him at seventy there could be no question of the unwisdom” of requiring Judges of the Court to leave upon turning seventy.8 The Albany Law Journal suggested that Judge Danforth “would make a good United States Senator. He is at the height of his mental and physical powers, and has many of the qualifications of a statesman. A man of his gifts and experience should occupy a sphere of larger usefulness than that of an advocate in the courts.”9

The legal framework organizing and controlling the judiciary continued to play a prominent role in Judge Danforth’s career after he left the Court. He was Chairman of the Commission on Constitutional Revision examining the Judiciary Article of the New York State Constitution. The Commission’s recommendations, which became part of the Constitution of 1894, established the four Appellate Divisions, and set fixed and limited jurisdiction for the Court of Appeals.10

Perhaps the best portrait of Judge Danforth can be culled from his own words. At a dinner given in his honor by members of the Rochester Bar upon his election to the Court, he said “[w]e feel the profession of the law to be the highest recognized in the State, to which all other professions defer. There is also none lower, for it extends its hand to aid the lowest. We have seen in the career of those who now adorn and honor the Bench that the change of the advocate from the Bar to the court is like turning the ring upon the finger – the glitter of the stone is lost, but more of the gold is seen.”11

Judge Danforth had six children; unfortunately, three of them died within a two-week period in 1859. His sole surviving son, Henry Gold Danforth, was a lawyer and a three-time member of the House of Representatives, serving the Rochester area. John Joseph May traced the genealogy of the Danforth family back to the late 16th century England in a book published in 1902, but no living progeny have been identified as yet.

Chadbourne, The Public Service of the State of New York.

Establishment and Growth, 1840-1847, available at http://www.luminguild.com/uu/uuellis.htm.

Rosenberg-Naparsteck, Failure is Impossible: The Legacy of Susan B. Anthony, Rochester
History, Fall 1995, Vol. LVII, No. 4.

O’Conor, The Court of Appeals and its Relation to the Methods by Which Public Peculators
Have Evaded Justice, Harper’s Weekly, Oct. 5, 1876.